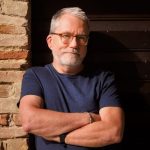 Dave King is a former painter who studied with Jim Dine and Robert Breer, among others. Of his debut novel, the New York Times Book Review wrote, “The Ha-Ha is full of emotional truth and establishes King as a writer of consequence.” The Ha-Ha was a national bestseller and  was named one of the best books of 2005 by the Washington Post, the Christian Science Monitor, the Pittsburgh Tribune-Review and Amazon.com, and a film version is in development with Tod Williams slated to direct. In addition, The Ha-Ha earned the 2006-07 John Guare Writers Fund Rome Prize Fellowship from the American Academy of Arts and Letters. Dave’s poems, stories and essays have appeared in The Paris Review, The Village Voice and Conjunctions and in the Italian literary journal Nuovi Argomenti, among other venues; the story “The Stamp Collector,” which appeared first in Fence, was included in the 2018 edition of The O. Henry Prize Stories. He teaches at NYU’s Gallatin School of Individualized Study and has served on juries for the Civitella Ranieri Foundation, the Lexi Rudnitzky Prize, the Ferro-Grumley Prize and other awards. A new novel, The Beast and Beauty, is in the bag, as is a memoir, Bad Dog. Dave’s current project is a pair of novellas tentatively titled Childhood / Maturity.   Credit for his headshot:   Marco Gugliarelli/Civitella Ranieri Foundation.


Nonfiction: Figure Out the Damn Year