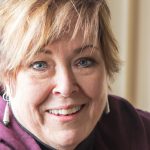 Gail Griffin is the author of three books of nonfiction, most recently “The Events of October”: Murder-Suicide on a Small Campus. Her nonfiction and poetry have appeared or will shortly appear in venues including the Missouri Review, Southern Review, Calyx, New Ohio Review, and Hotel Amerika, and in anthologies including Fresh Water: Women Writing on the Great Lakes and Southern Sin: Tales of the Sultry South and Women Behaving Badly.  She has just completed a collection of memoir essays on widowhood and a chapbook of persona poems in the voice of Queen Elizabeth I. “Bringing Up the Bodies” is part of a current project, a series of essays on whiteness and racism. Gail lives and writes in southwestern Michigan.


Nonfiction: Bringing Up the Bodies:
An Advent Story