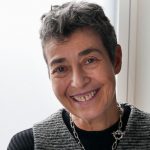 Helen Fremont’s new memoir, The Escape Artist, published in 2020 by Simon & Schuster, was selected as a New York Times “Editor’s Choice” new book. The New York Times also chose her first memoir, After Long Silence, (Penguin Random House) as a “New and Noteworthy” book in 2000. Helen’s works of fiction and nonfiction have appeared in numerous journals and anthologies, including Prize Stories: The O. Henry Awards, Ploughshares, and The Harvard Review. A graduate of Wellesley College, Boston University School of Law, and the MFA Program for Writers at Warren Wilson College, she has been a teaching fellow at both Bread Loaf and the Radcliffe Institute. She was a Scholar in the Women’s Studies Research Center Scholars Program at Brandeis University and worked as a public defender in Boston, where she now lives with her wife.