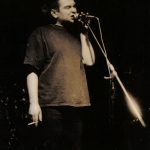 MARCIN ŚWIETLICKI (b. 24 December 1961), a Polish poet, lead vocalist of “Świetliki” and “Zgniłość,” crime writer, is recognized as one of the most intriguing, versatile and rebellious voices in contemporary Polish poetry. Świetlicki has twelve poetry collections to his name, including Zimne kraje (Cold Countries, 1992), Schizma (Schism, 1994), Trzecia połowa (Third Half, 1996), Pieśni profana (Songs of the Profaner, 1998; nominated for the NIKE Literary Prize, the most prestigious literary award in Poland), Czynny do odwołania (Unclosed until Further Notice, 2001; shortlisted for the NIKE Prize), Nieczynny (Closed, 2003), Muzyka środka (Mainstream Music Inside, 2006), Jeden (One, 2013; shortlisted for the NIKE Prize), Delta Dietla (Dietl’s Delta, 2015) and Drobna zmiana (Minor Change, 2016). Translated into numerous languages, his work has been presented in UK and US journals as well as anthologies: Altered State: The New Polish Poetry (Arc, 2003), Carnivorous Boy Carnivorous Bird: Poetry from Poland (Zephyr Press, 2004), New European Poets (Graywolf Press, 2008) and The Ecco Anthology of International Poetry (HarperCollins, 2010). His selected, Night Truck Driver, translated by Elżbieta Wójcik-Leese, is out from Zephyr Press in 2020. He lives in Kraków, Poland.