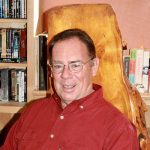 Robert Stothart holds an MFA from the University of Washington. He has published work in Black Warrior Review, New England Review, and Florida Review, among others. Four of his essays have been listed in Best American Essays’ “Notable Essays” (2011, 2017, 2018, and 2019). His more recent work appears in North Dakota Quarterly and Cimarron Review. In the summer of 2018, Robert was awarded the Conger Beasley, Jr. Prize in Nonfiction from New Letters. That essay, “Cataract Surgery,” is in New Letters, 85:2&3. Robert is retired from the Humanities Division of Northwest College in Powell, Wyoming. He and his wife live on a small ranch at the southern end of the Big Horn Basin, where his son and grandchildren raise and train ranch quarter horses while working a small herd of cattle.


Nonfiction: Winter Swans and the Assembly of God:
A Landscape