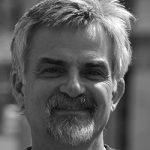 ROLAND MERULLO was born and raised in Revere, Massachusetts and graduated from Phillips Exeter Academy and Brown University (B.A. 1975, M.A. 1976). He has been a Peace Corps volunteer, worked with the U.S. Government in the former Soviet Union, driven a cab in Boston, worked as a carpenter, and taught at Bennington and Amherst Colleges as well as other colleges. Since 1999 he has made his living solely from his writing. He has published eleven novels and four books of non-fiction. His memoir, Revere Beach Elegy, won the Massachusetts Book Award in Non-Fiction. Revere Beach Boulevard was a finalist for the L.L.Winship/PEN New England Prize, and In Revere, In Those Days won the Maria Thomas Fiction Award in 2003 and was a Booklist Editor's Choice. His first book, Leaving Losapas, was a B.Dalton Discovery Series choice, and was optioned for film by John Turturro. Revere Beach Boulevard was optioned by the actor Tony Musante, and Golfing with God has just been re-optioned by GemFilms. A recent novel, Breakfast with Buddha, was nominated for the Dublin International IMPAC Literary Award, and has gone into its fourteenth printing. His newest book, Lunch with Buddha, just earned a starred review from Kirkus Reviews. His reviews have appeared in numerous publications nationwide, including the Boston Globe, Philadelphia Inquirer, Chicago Tribune, and Washington Post, and his essays and travel pieces have been published in The New York Times, Newsweek, Boston Globe, Philadelphia Inquirer, The International Herald Tribune, Golf Digest, Witness, AGNI, and many other publications. He is a passionate golfer, a devoted father, and a lover of good food and wine. He lives in western Massachusetts with his wife of thirty-three years, Amanda, and his two daughters, Alexandra and Juliana. His books have been translated into Spanish, German, Korean, Croatian, and Portuguese. For more about him, go to RolandMerullo.com