Severed: A Statement on the Ludicrous Nature of African Repatriation

–after a DNA test

Twenty-four percent of my body should fly back to Mali
heir to the legacy of emperor Sundiata, Sogolon Djata,
whose mother’s twisted body bore a great king
as prophesied by a griot to his father.

Four percent should be sculled back to Norway
aboard an historic Viking boat
and reunion with my Norwegian folk.

Four percent should land in Portugal to satisfy genes
gained on an early slaving ship when the Portuguese
paved the way for English, Spanish, and Dutch
expansion of the slave trade.

Forty percent should be removed to Angola
before tribal chiefs severed ties with their African brothers
the spoils of domestic warfare sold to trader outsiders.

A final twenty-eight percent to the British Isles
a repatriation with Scottish, English, and Irish kin
to blame for this lighter skin
borne from centuries of blending in.

Artress Bethany White is a poet, essayist, and literary critic. She is the recipient of the Trio Award for her poetry collection My Afmerica, published by Trio House Press in 2019. Her debut essay collection, Survivor’s Guilt: Essays on Race and American Identity, published by New Rivers Press in 2020, is listed as a Community of Literary Magazines and Presses social-justice read. She also served as the guest poetry editor for the Winter 2020 issue of Solstice. 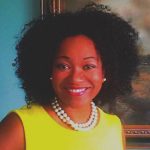