2012 was the first year I was eligible to cast a vote for President. I was 20 years old, a student at a small liberal arts college that was proud to boast about 1,000 students total in a rural swath of Western North Carolina, just south of Asheville. We were as far left as they came, quoting Marx and Audre Lorde while smoking hand-rolled cigarettes and sipping black espresso under ancient oak trees. We were an island of progressivism within a sea of conservatives, a pin drop of blue in a belt of red.

When I thought about casting my first vote for a candidate for President of the United States, I felt my chest swell with pride and responsibility. I couldn’t wait to enter that booth, darken the bubble next to my candidate’s name, and submit my vote. The state legislature had other plans.

That year, thanks to the redistricting of North Carolina after the census, my college campus was gerrymandered in half. It was as though someone looked at a map of us, saw that tiny pin drop of blue nearly lost in all that red, said it was too good to be true, and severed us down the middle with a red pen.

You see, there was a road that ran through the campus. Not a highway, not even a main thoroughfare. It was just a simple road, plain as any other, that connected the south end of the campus to the north end. Someone in the redistricting commission realized that the mail room was on one side of that road, and all college students used their mailing address for their voting registrations. It didn’t matter on which side of the road the students lived because we all sent and received mail from the same place, and regardless, the entire campus was in the same voting district.

This redistricting tactic, in another time or another place perhaps, could have been dismissed as a simple error. Lack of planning, lack of due diligence, an assumption about how colleges assigned mailing addresses. But no. The effort to disenfranchise college students in North Carolina was well underway, a sneaky movement in the bureaucracy of the state that rode on the coattails of everything they’d learned disenfranchising people of color and working people for decades.

The redistricting commission took a pocket of no more than 1,000 students and broke it down into two smaller pockets of 500 each. If it wasn’t for the few students who noticed the problem and began to ring the alarm bells, nothing may have happened. The votes would have been cast and thrown out due to incorrect registration address or polling place.

However, word got out and lit a fire of resistance in the hearts of these students. Hundreds of ballots were cast, and the confusion led to several hundred ballots being challenged by the County Auditor. Each student with a contested ballot had to sign an affidavit and plea their case in court. Most students eventually had their ballots added to the count. I was among those.

I remember thinking at the time: why do they care so much about our votes? It wasn’t like we had enough people to sway anything with statewide importance, and the district in which the campus previously found itself wasn’t a swing district where our votes could make a sizable difference. I realized that it was the very idea of our power—the notion that our very thoughts would spark something wild and untamable—was a threat to them. To them, we were trouble just waiting to happen.

That brush with gerrymandering inspired me to be the worrisome progressive young person the men in power were so worried about. I voted in every election. I organized marches and rallies. I signed petitions. I wrote letters. I was every bit the thorn in their side that they were worried about.

We did live there. We worked there. We volunteered our time and donated our money there. We paid taxes there. We supported local businesses. College students give so much to their communities. They deserve to vote in those communities, too.

Morgan Dykeman wields strength in vulnerability and an irreverent sense of humor to craft personal essays about feminism, relationships, eating disorder recovery, and life in the Pacific Northwest. She lives near Bellingham, WA with her car-enthusiast husband, senior citizen doggo, and three dozen house plants. She’s a tenacious advocate for social justice, a committed community organizer, and an irrepressible optimist. By day, she serves as a Community Liaison for a local elected official. When she’s not rallying or writing, you can find her buying more houseplants, to her husband’s great dismay. 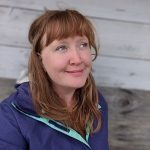