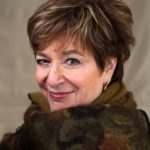 When Dolly died this year, grief caught me by the throat.  “Mother and daughter,” people used to say when they passed us on the street; me pushing her wheelchair down an uneven sidewalk; her cursing skateboarders whizzing by. At the community college, she’d been a speaker in my classroom.  No one imagined we’d met behind bars.

She strode into Program Room 2 in 1987, her pocked-mark face framed by bouffant hair.  Dolly, a grandmother, announced her nickname.

After “Dolly Parton?” I asked.  I was cocky, a new teacher in the pen with an intact family.

Her throaty laugh filled the room.  “My great-grandmother called me ‘Doll.’  It stuck fer Chrissakes.”

While others guffawed, I saw the babe she must have been.  Bonnie to a Clyde I could only imagine, a man I later learned had killed an enemy.  Dolly had been near the scene but did not wield the knife.  She had a lousy lawyer and got “joint venture,” leading to a life sentence, but when we met, she was only a few years in.

“What a bargain,” she used to say of her eligibility to see parole after fifteen years. Zero resources to fight her sentence or the abusive boyfriend who refused to admit she had no part in the crime.

She brought knitting to our classroom and gossiped as though she still worked in a beauty salon. She planned to get her degree and “make the damn State pay” for their mistake.   She’d stand at the one barred window in the run-down room where pieces of electrical cord hung from the ceiling; she’d blow cigarette smoke into winter air.  She was the one who noticed that a bird’s nest had fallen from a barren tree into the yard; the one who befriended a nineteen year-old ostracized for killing her daughter.  Dolly insisted that we start a theatre program since men had that privilege.

While I gave her opportunity, she gave me as much.  She was the cajoler of prisoner lethargy, the nurturer for sore spots.  It was Dolly who gathered women to classes and to console me when I lost my mother.  She knew the right words; she never said too much. It was Dolly who engineered a begonia behind bars “for my director” at the curtain call of The Merchant of Venice.  She played Antonio to a standing ovation.

When I got the call from her sister, the words were simple and the meaning even more so:  Dolly has had enough of illness; she has chosen to die.

I was in shock.  Death is always too sudden, too indifferent.  We had buried my mother-in-law two weeks before and I was still bruised from that death:  another mother gone.

Dolly’s life had not been easy.  She relied on wits more than money.  She knew how to get the city to move her from one public housing apartment to another.  She wrote poems about missing the taste of lemons; her mother’s hands.  She had three children, and as a single mother, raised pigs on an Iowa farm.  She’d lived with her co-defendant whom she constantly forgave – until she went to prison and learned to stand up for herself.

One of our saddest days together was when she cried about a grand-daughter’s murder.  She cried too about the child’s mother, not yet the addict she would become, but a daughter Dolly feared had inherited her bad choice in men. I reminded her of the good things –the battered women’s program she started, the Associates Degree she’d earned – but she was inconsolable.

Dolly came up for parole in 1999.  It was a grim sight when I entered the spare room to testify on her behalf, and eyed Dolly, a grey pony tail braided down her back.  She was sixty-years-old, four years younger than the age my mother was when she died, and sitting handcuffed and leg chained.
She won parole, and in 2001, I went to visit her at her brother’s house, her new home.  She had a room filled with a flowered quilt, stuffed animals, and photos.  She had her own bathroom and trees in the back yard.  I told her of my impending breast cancer surgery; she hugged me fiercely.  Then she cooked spaghetti with sauce from scratch, and we sat together and ate, uninterrupted by time and correction officers.
There were many meals in the free world.  Some at a Chinese restaurant; some when she moved back to the city.  She’d feed me lasagna – her mother’s recipe.  Sometimes I’d buy us dinner at a steak house; sometimes, a burger at the 99.

In her apartment, I’d be so relaxed that I’d fall asleep curled up on her couch.  There were always stories about her grandchildren; there was an inevitable tragedy too – someone would have run away; someone would be high; bills would be impossible to pay. In those first years after she was released, I gave her what I could:  paid and unpaid gigs to speak together about women in prison; shopping trips for her necessities; an air conditioner.

Then, two years ago, Dolly, who’d had diabetes and heart problems even before prison, had bouts of pneumonia.  Years of smoking had brought on emphysema, and eventually, chronic obstructive pulmonary disease.  She could barely walk around her apartment, was hospitalized on and off, and struggled to breathe with a respirator.

The phone call from her sister was followed by a talk with Dolly’s brother.

“Yes!” came a raspy voice in the background.  I’d come the next day.

That night, I called to see how she was doing, and her daughter answered, the one that hadn’t overdosed from drugs. “I don’t know what to do,” she told me.  She wasn’t strong.  She wasn’t ready.

“She just wants you to be with her,” I said, conjuring up my mother’s coma and how I sat, whispering into the phone from afar.  “Tell her you love her.”

That night, Dolly fell, and when her daughter summoned the ambulance, Dolly refused to go.  She would have no more of imprisonment, be it behind bars or on a machine that kept her alive.  She called out her mother’s name, and a few minutes later, passed away from this world much more gently than anyone could have predicted.

I went to her funeral.  I cried with her family.

She called me her teacher.  But as our friendship is written, she was mine as well.   We found in each other what we needed and something unnamable we lacked in our lives.