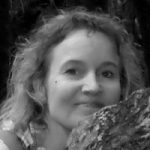 My questions never shocked you, my appeals to fact. You never ran crying from the room or shunned me when I called out your father, your book. I was surprised at first. You even laughed once and put your hand on my knee, Oh, Betsy!

Sacrifice is senseless, I argued, imputation is illogical. Why must you wear that cover on your head? You had answers for everything. Fear is the beginning of understanding, you said. The blood of the lamb will wash you white as snow. No, I said, sorry, no. Your math was maddening. But I had to give you this: you were the only one in the family who would talk to me, who didn’t walk away.

When you got sick, the family prayed. I read all I could. There were tested and untested therapies; you tried some of each. A cancer cell, I learned, is one that has forgotten how to die, a tiny flipped switch. OFF/ON, LOW/HIGH, the primitive language of ASCII. I sent you books and articles, passages highlighted. Shark cartilage. T-cells—A new therapy—available in Mexico but worth checking? That was more than a decade ago. I scarcely remember now. Actually, I remember you; I do not recall myself.

Once, they held a special service for you, a laying on of hands. I was surprised when they asked me to come up front and join them. I sat with my hand resting uneasily on your thigh, feeling your heat through the thin layers of dress and slip and pantyhose, and did my best to pray. I wasn’t in a position to ask for any favors, so I just clenched my eyes shut and thought dear God don’t whammy her because of my hand. Such was my faith, then and now, sufficient to see me roasted, to call down the fires of hell. Never over that hump to the graceful place where you lived, Ruth.

For a while, you got better. Sick or well, you never changed. When your hair fell out, you wore a wig and a handkerchief; you replaced your breasts with a prosthetic bra. You left your skin, which was often inflamed, uncovered. You were unretouched. If any of these things troubled you, if you had any instinct to vanity, you kept it to yourself. Talk about you inevitably turned into talk about me, or whoever else was in the room, or the children you taught, or Jesus.

In 2004, Stephen Hawking scared all the scientists who were smart enough to understand (which wasn’t a large population, but still) when he suggested that a black hole might be powerful enough to eat information. He announced this to a crowd accustomed to running the math on doom, measuring out the life span of the sun, laying bets on whether the universe would go out with a bang or just scatter and go cold—none of this perturbed them. But the loss of information itself, an empty little maw that could make three no longer three—this was more than they could bear, and they revolted.

When Anna called, I didn’t quite believe it. They’d said you were dying so many times before, and I was young and didn’t really believe in death, not a death you sit politely waiting out. So I took my time, cutting asters from my yard, wrapping the stems in wet paper towels and bagging them for the trip, tying them with a yellow ribbon, propping them carefully on the car seat. No wonder she thinks she’s dying, I thought on the way over. They’re always telling her it’s the end. What else do they ever think about? I had seen you only a couple of weeks before at Anna’s, where you were staying. You looked tired, but you said you were feeling better. This much I remember clearly: you were sitting on the sofa, pictures and cards from the children, some of the hundred or more people who loved you, scattered on the table before you. Trust and obey, one read. Miss Ruth Get Well. In them, you appeared as a pot-bellied stick figure with hands like tiny suns, a purple-haired superhero sailing through the clouds. Suddenly you said, with a determination that seemed almost like anger, “I just keep holding on to his promises, knowing that he never fails,” and you held your hands out as if you were holding onto the rung of a ladder, doing a chin-up. For once, I said nothing, although I could not stop myself from thinking it: holding onto thin air. Swell.

Cars were pulled up onto Anna’s lawn, parked end to end. I found an open spot by the wash line and came in through the back entrance, adding my shoes to a heap in the breezeway. I could hear them, their muffled singing through the ceiling, growing louder when I opened the door to the kitchen. Rapid, stocking-footed steps sounded on the stairs and Anna appeared. I presented the asters in their soggy bag and she laid them on the counter without looking and said, Go up, go on up and actually gave me a push. The stairs were narrow and steep, with a tiny landing midway where someone had placed a battery-operated candle and a flower arrangement bearing a tiny card. So funereal, I thought. So morbid.

They were packed into a little attic room, wooden folding chairs crammed into rows, singing from hymnals. You lay before them on a hospital bed, your eyes sweeping back and forth, restless with pain, your arm propped on a pillow, big around as a grapefruit at the elbow, barely recognizable as an arm anymore. They made room for me and I moved forward, touched your shoulder where it looked like it wouldn’t hurt. I whispered in your ear and kissed your cheek. It was sticky and hot. A pause, a number was called, pages turned. I backed slowly through the crowd, back the way I’d come. I didn’t know any hymns and I didn’t want to watch you die. Downstairs, I sat on Anna’s couch. Across the road, some distance away, a tiny tractor plowed. That afternoon the well ran dry; a fire truck came to fill it. I watched the oldest brother dump a bottle of bleach in the trap, talk with the firefighters, hold out some money. The firemen waved it away. Once Anna came downstairs, walked briskly across the kitchen, picked up a dishtowel and pressed it to her face. She cried quietly into it for a minute, then laid it back down on the countertop and smoothed it flat, staring out the window over the sink. After a few minutes she went back upstairs.

Toward evening, the singing stopped. There was a quiet commotion, voices rising and falling, chairs groaning. Later the funeral director rolled you out on a stretcher, zipped up in a black bag like the ones dry cleaners use to cover an expensive coat.

Schrodinger is frequently misapplied. From the position of the cat, he said all along, there is no contradiction. The cat observes itself. Then it doesn’t.

More than 300 people came to your homegoing service, so many they had to bring up folding chairs from the basement. I could not help but wonder how many people my funeral would draw. A number less than or equal to 300, certainly. Likely smaller by an order of 10. The old man went to the front of the church and said, I don’t understand.

Bad news: a logic gate requires two irreducible contradictory states that are not themselves subject to logic. OFF/ON. LOW/HIGH. Information is a construct.

They sang for more than an hour. They sang without accompaniment, slowly and carefully in complicated harmony, as if the singing itself mattered. There were so many people there, so many voices familiar with the music, that even as they walked out of the church and across the driveway to the gravesite, falling in behind the brothers who carried you on their shoulders, the song never died out, but just broke up and meandered a little on the stairs. Happy day, they sang, happy day. Anna’s husband had made the casket, a plain, hand-rubbed walnut box—no handles, no rails, no silly doorknockers or trim. They lowered you into the grave with ropes and took turns throwing in dirt. I rolled and unrolled my program, ready to go. But at the point in a funeral when everyone usually leaves, they stayed. The brothers took up more shovels and started piling damp dirt into the grave, wrestling the rocky clay into the hole, and I realized they were going to fill it. Several times Daniel, the youngest, jumped into the hole. He stomped and chopped the dirt with the shovel so it wouldn’t settle later, rubbing tears away with his sleeve. They sang until the hole was filled and leveled and tamped smooth, ready for seed; I mouthed the words the best I could and worried my program into felt. Only the children strayed, running off to the playground behind the church, working up an appetite for the lunch they knew would follow.

There was a time I’ve never told anyone about, many years before I came here, when I went skating alone on a lake, following the edge of a large clearing someone else had swept clean. I’d borrowed the skates and was unsure of the ice. In places it seemed frozen to maybe a foot deep, the ice bubbly and white and gnarled and choppy, but in others it was slick and black and fast. I tested it, listening to the tiny snapping sounds of the ice, here and there a deeper creak, and decided it was all right, the sounds harmless as a house settling. I skated farther and farther into the perfect snow, carving out lines and circles and arcs legible only to the wavering stars, until it was so dark and I was so far out that the click and scrape of the skates seemed like the only thing left—no lake, no trees, no skater. Just a sound that was quieter than silence.

The new religion is just like the old, running primitive end games around the intractable zero sum. 0/1.

Through the singing, on and on, I heard Daniel’s blade, the patient clank and scrape of the metal on stone. It was the sound of being suspended, of being carried on someone’s shoulders, of old leaves riffling and inscrutable figures being carved on a blank page. It was a sound I know too well, Ruth—the sound of being alone.