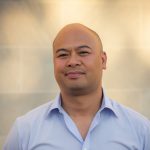 You can see the red buds on the oaks that line my street. And what had been a long and dreadful winter looks to be thawing now. A sheet of ice that was once our patio is now pocked with holes and the rust of the brick is now visible under the light sheen. I’m taking my third walk of the day with my sons after their online schooling and although there are signs of a return to what once was, I am apprehensive. It’s an apprehension borne from my former life as a fledgling scientist and son of an immigrant physician as well as an apprehension sharpened from years of living as an Asian face in predominantly white spaces.

My wife Meredith and I made the agreement during the early weeks of the pandemic that she was going to do the shopping and be the outward facing member of the family. This was a decision made as anti-Asian sentiment was rising and society was beginning to lockdown, angering many who were looking for someone to blame. She would stand in line. Hunt for toilet paper and cleaning products. She would return home with the groceries and we would, together, vigilantly soak the produce in soapy water, wiping all the counter surfaces with bleach. In my community of writer friends, “shopping while Asian” is a hashtag quickly linking incident after incident of verbal and physical abuse in public spaces. And while I have not experienced any of this firsthand, she has decided that the potential risk was enough.

We are afraid of that which we cannot see. And some of us are very afraid of what we are seeing right in front of us. And yet, in the midst of this, the red oaks are moving on. And my children, who are tired of being inside for so long, are listening to the neighborhood kids playing in their backyards and wishing to join them. I think of Lena Tuffahaw’s “Slipshape,” as we consider the possibilities that await us in what we all hope is a new awareness of who we are and who is included in the conversation. I think, too, of the ghosts who loom large in our consciousness, like the spirits in Patrick Rosal’s “The Hanged Ghost,” who reveal themselves and call to us so that we do not forget. We are afraid to speak to our dead and to our histories, and in denying our ghosts and our histories an audience, we lose ourselves.

I’ve been longing for conversation in this year of loss and turmoil. I have looked to poetry as a way to keep me company. Cedric Tillman’s “Absent from the Body” refuses to look away, and in recognizing the moment of the poem, which is this moment, I too can never look away. I have also loved the remembrance of our mobility in Suphil Lee Park’s “Rome, in Hindsights.” Or John Buckley’s poem whose speaker communes with his father in the form of a slideshow. And with that hope, Kai Coggin’s poem sees the seeds her speaker has planted as “little hopes,” which has been the function of art for me during these dark months of incalculable sorrow. The poems that make up this issue of Solstice, my issue as guest editor, contemplate both the moment and the past. They acknowledge the terror and pain of this difficult year as well as the inertia of the forces that have created strife. But importantly, essentially, there is hope. The music of R&B from Steven Cramer’s “Elegy for Little Richard,” or the hope found in the imagination as found in Gary Jackson’s “The Invincible Woman goes viral.”

The thaw has arrived in Central Massachusetts, and as I walk down with my street, they have handed me their coats because they are bold in the presence of the sudden warmth of March. Soon, I hope to invite friends back into the yard to ask how they’re doing. I would very much like to know what has happened to them and will listen with my whole body, as one must when in the presence of poetry.