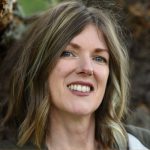 My father is in bed half a country away
telling my mom how to make chicken from the sun.
His cancer opens a shadow hand
in his brain and where it darkens,
the world slides sideways.
He looks through the window
by his bed into the 1940s. He thinks
it’s TV and he tells me what’s on it.
A street. A man with a dog.
He laughs because it’s a comedy.
Back where I live, we’re trying
to figure out how to eat
pizza the way we used to
before a teacher explained sex
to our daughter: it’s like pizza—everyone
likes it, but with different toppings,
and you have to talk
about what you want before you order.
Now we just laugh too hard to put in
the order. So what if language doesn’t quite
work any more, or works so much
it means anything? When I visit my father,
he tells me to find a maple bar bakery
because he misses the blaze of leaves.
I admit that I too miss the trees
we planted, and it’s alright if he can’t reply.
He sleeps. I return home. I am blue,
so I tell my daughter it’s like a falling barn.
I mean life but she thinks I mean sex.
Then I say Whoa, check out that flowering field,
and that sounds like it’s about sex too.
So we name every item in the entire world
and it’s like we’re giving birth to sex every time
we point to something.

The bone is bleached by the sun.
The hawk is circling its prey.
It’s always hottest in August.

Meanwhile, my father is trying
to make one real sentence: he says Death,
he says Death, he says Death
is different from winter. He’s dying.
We drive past all the places we might go someday.
My father scratches at the window and dies.
We go on living. I love everything
disastrously. Whoever you are, the trees
have always been on fire.