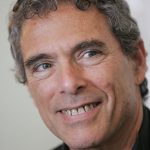 Poetry in translation
by Amir Or and Seth Michelson

from CHILD translated from the Hebrew by Seth Michelson

A fallen angel always remembers
height is depth,
the wings – the fear;
how his heart exfoliated leaf by leaf
till left stark naked.
An angel that fell
from love to hope
flaps its ghost wings in vain;
parched and starved, his hands stretched out
to his soul for charity.
How could he forget, how could he be happy
with his lot
that once was starry sky?

A nine-year-old was left alone
in the school courtyard
on the ground, watching ants.
A child who’ll never again be betrayed,
never let his mother
inside his heart,
never let anyone in,
who will yearn.

Among the graves of the glutted dead
I was found, removed, and halved
by a butcher knife of truth – on this side the living
and that the dead.
Here I am.
I returned from oblivion, removed
my turtle shell,
and found my skin human, a child’s,
five or six years-old, not yet silenced.

Amir Or, the 2020 Golden Wreath laureate, has been recognized as a major voice in world literature. His poetry won him numerous national and international awards, lately the 2016 European Atlas of Lyrics award and the 2019 Homer European Medal of Art and Poetry. He published 14 poetry books, 2 novels, Essays selection, and 12 volumes of his translations from Ancient Greek and English. His work was translated to more than 50 languages, and published in 40 books in Europe, America and Asia.

Or was born in Tel Aviv, 1956. He studied Philosophy and Comparative Religion in the Hebrew University of Jerusalem, where he lectured on Ancient Greek Religion. He is the founder of Helicon Poetry Society, the Hebrew-Arabic Poetry School, the Sha’ar international poetry festival and the Helicon poetry review. He has served as national coordinator of the U.N.-sponsored Poets for Peace, and national editor for several international magazines.

Seth Michelson is an award-winning poet, translator, and professor of poetry. He has published seventeen books of original poetry in English and Spanish, poetry in translation, and a bilingual Spanish-English poetry anthology. His awards include a Fulbright, an NEA fellowship, Mellon grants, Pushcart nominations, and prizes from Split This Rock, the International Book Awards, and the Paterson Poetry Prize. He currently teaches the poetry of the hemispheric Americas at Washington and Lee University, where he founded and directs the Center for Poetic Research. He welcomes contact at sethmichelson@gmail.com.