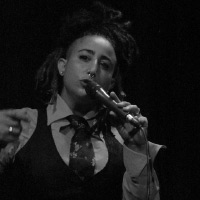 Candy Royalle is a performance artist and poet who has performed alongside many of the greats, including Ursula Rucker, Shane Koyczan, Rives, Anis Mojgani, and Holly McNish to name a few. However, she crosses artistic boundaries and engages in many different creative endeavors. Most recently she has layered her rhythmic words and hypnotic voice with the unique sounds of funk, jazz, and soul trio Sloppy Joe for their collaborative work Stories by Starlight, which was nominated for the Sydney Fringe Festival Music Award. Royalle also bends genres by integrating sound effects using FX and loop pedals in her performances. Currently, she is working on a film series entitled TWELVE, which brings together the work of filmmaker Patch Sinclair and composer Ashley Blackmore in response to her poetry. Her one-woman show Love Spectacular sold out at Sydney’s first Fringe Festival, where it was nominated for the “Show-stopping Individual Performance Award” and continued to win rave reviews at Melbourne’s Midsumma Festival and the Adelaide Fringe. Besides winning the World Performance Poetry Cup in 2012 and the AIPF Excellence in Poetry Award in both 2012 and 2013, Royalle has won numerous competitions and has been nominated and highly commended for a number of awards. Her work has been covered in many major media outlets, including ABC, Fairfax, News Limited, CNN, as well as local and street press.