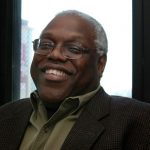 Eric Charles May is an associate professor in the fiction writing program at Columbia College Chicago. His novel Bedrock Faith was named a 2014 Notable African-American Title by Publishers Weekly, and a Top Ten Debut Novel for 2014 by Booklist Magazine. A 2015 recipient of the Chicago Public Library Foundation’s 21st Century Award, May is a former reporter for The Washington Post. His fiction has also appeared in Fish Stories, Solstice, Hypertext, Flyleaf Journal, F, and Criminal Class magazines, and the multi-genre anthology We Speak Chicagoease. In addition to his Post reporting, his nonfiction has appeared in Sport Literate, Chicago Tribune, and the personal essay anthology Briefly Knocked Unconscious by a Low-Flying Duck. He has taught at the Chicago Writers, Stonecoast, Solstice, and Northwestern University writers’ conferences.