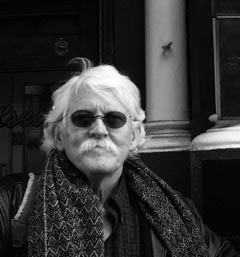 J. Spru (JAMES SPROUSE) is the author of a chapbook, Methane (1972), published by Stonemarrow Press. His work has appeared in Abraxis, Cincinnati Poetry Review, New Delta Review, Puckerbrush Review, Road Apple Review, and Wisconsin Review. Two of his short stories have been finalists in two annual Glimmer Train contests, another was a semifinalist in the New Millennium Writing Competition. He has worked as a logger in British Columbia, cannery worker in Seldovia Alaska, tree planter in Oregon, heavy equipment operator, semi driver, commercial fisherman, fruit picker, bartender, and wielded a "California Shorty" in the lettuce fields of Salinas. Mr. Sprouse has ridden freight trains in the Pacific Northwest and Canada, hitchhiked across the U.S. and lived in the Haight Ashbury in 1966 and '67. In the mid '80s Sprouse traveled to Delhi and Rajasthan, India, to seek enlightenment but nearly died of malaria. He has been as a practitioner of Zen Buddhism in the U.S., England, Poland, France, and the Netherlands and has worked as a physician assistant at the Augusta Mental Health Institute and the Togus V.A. Hospital in Maine until his retirement. He resides in Winterport, Maine, with his wife Sandy and their cat, Willa.