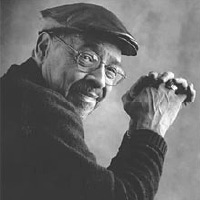 Kent Foreman (1935–2010), whom the Chicago Tribune has called the “elder statesman of spoken word,” enjoyed a career that spanned five decades. In the 1960s, he appeared with such titans as Maya Angelou, Amiri Baraka, Alan Ginsberg, James Baldwin, Lorraine Hansberry, Janis Joplin, Curtis Mayfield, Gwendolyn Brooks, and his mentor, Oscar Brown, Jr. He toured briefly with Max Roach as a jazz poet and lyricist, and his poetry has been accompanied by renowned musicians Maurice White and Jack DeJohnette. Kent was Lou Gossett’s understudy in the historic NYC production of Jean Genet’s The Blacks. He starred in Summer in the City, a musical by Oscar Brown, Jr., and co-starred in another Oscar Brown musical, It’s About Time. Then known as one of the youngest of the Beat poets, his piece “Chicago” won the Friends of the Public Library esteemed Carl Sandburg Award. In the 1970s, Kent appeared in and wrote scenes for the anti-establishment film Punishment Park by Peter Watkins, an Academy Award-winning director. Kent was featured in two LA plays, James Baldwin’s Amen Corner and The Loudest Noise in the World, both starring and directed by Frank Silvera. Kent was also cast in King Lear with Frank at Washington, DC’s Arena Stage. In the last two decades of his life in Chicago, as a mentor and co-performer, Kent influenced and encouraged generations of young artists. He appeared on television programs in Los Angeles, Boston, Chicago, Minneapolis, and Atlanta and in scores of university and school programs as well as numerous broadcast readings. His Def Poetry Jam haiku is considered a classic; his cool performances and his poetry’s blend of the scholarly, the vernacular, and the philosophical carried Kent to the finals of the National Poetry Slam three times. http://kentforeman.net/