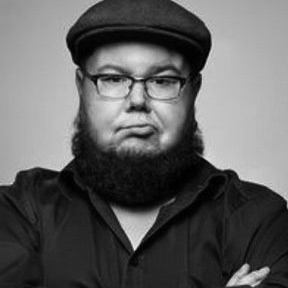 Shane Koyczan, a Canadian poet and spoken-word artist, was born in Yellowknife, Northwest Territories, to a French mother and a father of First Nations heritage. He grew up in Penticton, British Columbia, with his grandparents and was educated at Okanagan College.

In his poems, Koyczan uses personal narrative to engage themes of social justice, mental health, and love. His debut collection, Visiting Hours (2005), was selected by The Guardian and Globe and Mail as one of the Best Books of 2005. His autobiographical novel in verse, Stickboy (2008), is being adapted for the stage by the Vancouver Opera. Koyczan is also the author of the collections Our Deathbeds Will Be Thirsty (2012) and A Bruise on Light (2014). He is a member of the "talk rock" band Short Story Long and has performed with poet Mike McGee and writer and musician C.R. Avery as the spoken-word group Tons of Fun University (TOFU).

Winner of both the individual champion title at the National Poetry Slam and the Canadian Spoken Word Olympics, Koyczan performed his poem "We Are More" at the opening ceremonies for the 2010 Vancouver Olympics. Millions of people have viewed the animated video of his anti-bullying poem, "To This Day" on YouTube, and Koyczan has given a TED Talk on bullying and created a free anti-bullying smartphone application as part of his To This Day Project. For his social justice work, Koyczan received a BC Civil Liberties Award for the Arts.