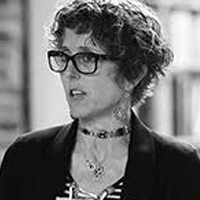 Sylvia Bowersox served her first tour in Iraq in 2003-2004 as a U.S. army broadcast journalist. Her assignments took her around the country, but much of her time was spent in Baghdad, at Coalition Provisional Authority headquarters, which serves as the background for much of her work. She returned to Iraq for two more tours as a press officer assigned to the U.S Embassy Baghdad public affairs office, and later to the Special Investigator General for Iraq Reconstruction. She lives with PTSD, and writes about her experiences in both wars. She has been honored by multiple Pushcart nominations. Her first book, "Triggers", a chapbook of war journalism flavored poetry and prose, was published by JerkPoet Press. Her work has appeared in the journal 0-Dark-Thirty, The Chico News and Review, The Synthesis, Tethered by Letters, and The Washington Post. Sylvia received her B.A. in English Literature from San Francisco State University, and is currently completing a Masters degree program in English at California State University, Chico where she lives with her veteran husband and her Black Labrador service dog, Timothy and her teenage son Holden.