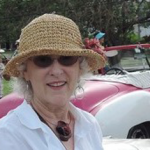 Lines in italics were pronounced by Secretary of State
Mike Pompeo during a speech outlining U.S. demands
for a new Iran nuclear accord.

America is sort of tripping down the alphabet.
B for balk, ban, bigotry, bully. C for
Children separated from their parents, moms &
Dads detained, demonized, deported.
Expired visa sole crime of some.
First––America first so we’re tripping out of deals.
Global warming a hoax despite Macron’s kisses.
How about the Iran deal? We wouldn’t tolerate
Iceland doing what the Iranians are doing. Or
Jersey, Latvia, Moldova, Niger, or
Kansas. I mean, I could just pick number[s] or
Letters, scatter them from whose-land-is-this-man’s-
Make-America-great-again red cap.
No wizards needed to erase magic slates
Of accomplishment. Count to ten & deals are
P for peeled. Singsong 26 letters, la la la, a quid pro
Quo’s nailed into A is for apple, P for pie,
R for Raoul deported la la la to his pueblito,
Struggling to survive in México after 30 years here.
T for Teresa, self-deported to El Salvador,
Unraveling pride from her vida as she waits for
Visits from children “Born in the USA.” Oh let
W be for wish, wish to restore reason, for
X-ing out this sort of tripping down the alphabet,
Yankee-Doodling of arbitrary fixes & nixes.
Z? Oh let it be for zephyr. For zen. Oh let it be.