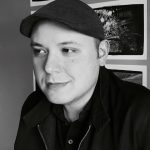 Like all things, it begins as water and ends as water

As water, it may become vapor, steam droplets on a window, a heaviness in the air we bring into our lungs

It may become dew or dog piss in the grass, a body’s nourishment or excreta

Residue from the time when it once had a body

From a time when we too had bodies, embodiments of the air we breathed

When we were ourselves bodies, when we would breathe in one another’s company, could feel that warmth and take it within ourselves, as though it were ours to own

As though we’d become the vapor ourselves, and the world as vaporous

As this empty park, fogged in November

As the gray smoke of an animal at stride, which itself was a body at the edge of shadow

The body of smoke streaking the abandoned ballpark

A creature of smoke, creature from creare, a thing created

A residue of creation gliding the field, parting reality as it went

And we were also that smoke, my dog and me, witnessing a promise dragged in the creature’s wake

It moved as though inevitable, as though a piece of one dark had broken off to join another

And somewhere along the treeline, we joined that darkness with it, our consciousness like a mist that trailed in its wake, trailed from our minds as though outside of ourselves

As though these fields slathered in dew and the piss of dogs had condensed into a fog that we then breathed in, the creature, my dog, and myself

This fog even the streetlights struggled to pierce, which joined with the heat in our lungs as we exhaled

And became a lonesomeness overtaking us all, and the more alone we became the more we steamed outward

And isn’t this city in November an ice about to form?

Doesn’t it all go back to zero in the end, as all things must?

Born in the tray, the ice comes to rest in the glass

This very glass with the gin and the lime wedge, this glass that I held twenty years ago when the future felt like a promise, motherless but possible

Which has become instead this year of pestilence, of the late night YouTube videos

Newly christened freighters sliding off their blocks, crashing heavily off blocks into the shipbuilders’ canal

Which I’ll always consider a kind of birth, all that tremor and fulfillment

All that welded steel bobbing in the channel, perfect gibbous of water breaking over the banks

Because even an ice cube once had a mother, once cradled in the protection of the tray

Just as I, twice unmothered, was once a body grown in another’s

Immersed in the waters produced by a body, a little condensation of cells and potential

As a smoke drifting a treeline, as a fleeting streak in the night

Which will come to stillness at some point, either violently or in peace, either witnessed or unseen

And release its waters once more into the vast, rippling pelt of the earth