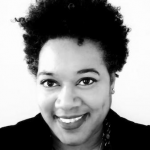 Some were perched on the limbs
Of D.C. trees to get a glimpse of it,

History being made, once again,
In the middle of so much black & white,

Had never been made, up close.
All that colored hope collected on

Hope stolen off the coast of Africa,
Hope chained to a tree in the Florida heat,

Hope purchased at a Galveston, Texas
Auction block, hope sold down a river

In Charleston, hope traded for a
Race horse in Missouri, hope terrorized

At fourteen in Mississippi, hope
Assassinated on a balcony in Tennessee,

Hope in a Virginia slave preacher’s
Revolt, hope from the Carolinas to the

Slave holding shores of Maryland. We came
To hold this truth to be self-evident that

All Negroes are created equal to the forty-forth
President of the United States of America.