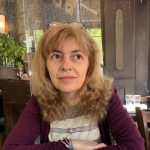 We didn’t own any luxury items the way normal families invested in golden or silver teaspoons, watches and jewelry. Well, there was mom’s silver teaspoon set, but it disappeared very early in the game, practically in the first weeks of the crisis. This was the official name for the time after the fall of the Berlin wall. Bulgaria got comfortable with the crisis and pickled in it for the past twenty-five years.

We owned a two-foot tall red and brass samovar, which no one knew how to operate, we just dusted it on Sundays. We didn’t drink tea in our house, we were coffee people. The way we were dog people, only without a dog. On one of Mom’s many trips to Russia, there was probably nothing else to buy except a samovar and a silver spoon set, so, obediently, she and the rest of the tourists in the bus did just that. We were a brotherly country so it was simply not polite to come home empty-handed.

Mom was constantly looking for those teaspoons, hunting for them, opening drawers, sniffing inside and interrogating us in the corners of the house. She operated on the premise that if you ask the same question hundreds of times, even the walls will surrender and reveal the answers in red wobbly letters: “Your two ungrateful daughters sold them for money for cigarettes on September 24th at 9:05 on the corner of Zhdanov and Opulchenska,” blood drops dripping from the last two words.

She had a lot of important questions that she went through on a daily basis, the way some people go for a run or do pushups, or warm up for singing practice, we answered questions that were more like statements, such as,

“You already smoke, don’t you?

You have a boyfriend, right?

Did you go to school?

You don’t have your homework, do you?

You already have a boyfriend?”

Those were always delivered in a matter-of-fact voice, like a bank form asking you for the name of your first dog. Just to make sure that you are still you. We didn’t have a dog.

“Dogs transmit infections. Do you know where the silver teaspoons went?”

She didn’t need the spoons, just needed to know that we had them in case of a sudden urge to drink some tea. Sometimes freedom is just that. You’re not going to ever use it, but it’s calming to know that it’s there for you if you please. The spoons were never found. They were either stolen by the endless line of best friends, boys or girls who ate bread loaves with mayo and drank Kool-Aid in the red kitchen or they were sold on the black market, for cash. We wouldn’t say.

There was no jewelry to speak of. Mom had a bunch of colorful hippie plastic bracelets and bead necklaces tangled together with strings of yarn for knitting or mending socks. No one could steal that. It required the nimbleness of a watch repairman and the patience of a large animal.

The rest of the family’s valuable things went in the highest cabinet of the credenza. You could reach it if you balanced one foot on the arm of the armchair, which was missing its left leg and was supported by Lenin’s Speeches Volume Two. You then pushed up and landed your other foot on the TV, thus hanging in the air on top of the glass table, which loudly threatened to shatter not if but when you fell on it. It’s a wonder we are all still alive and with almost all our marbles intact.

The house was empty for about an hour while mom traveled to work and dad traveled back from work. They passed by each other in their respective buses, not even knowing that their life partner and person they woke up next to every morning was right there. I strongly believed, based on rumors at school, that if the love of your life is close by, you can feel it by the hairs on your neck standing up. The problem of finding love, recognizing it and not letting it go was important to me. I tried to solve it as math problem many times; where exactly did the two lovers meet between point A and point B on the number eight – five line. We called it eight-five, like everyone else, even though Dad scolded us that it’s eighty-five and sounded illiterate to say it otherwise. If he had time he would go on about the Communist party and how they shortened some words to save time and uglify the language. Com instead of committee, zav instead of zavejdasht (in charge) and so on. Be Ka Pe, for Bulgarian, Communist Party.

Like rock climbers we advanced slowly and individually up the bookcase and towards money, sex, and finally one piece of candy as a full stop of that particular escapade. A celebration of life but also moderation, and while we are at it, no broken bones either.

À tout à l’heure as the French said, we waved goodbye to the two Davids and went back to our math homework. When I say we I mean my sister and myself. My brother crawled later on and for the same book but for Venus de Milo, not for the Davids. He wanted me to clarify that bit. Men are always dead serious when it comes to who watched what and when. I am not ashamed to say that I watched Venus too, just so I knew what was coming my way and to be ready. Girls in my class said that if you drank this sweet oat drink boza, your boobs would grow bigger. I wasn’t sure why that was important, especially having a few teachers with pretty grotesque racks, but since all the girls went to the pastry shop for boza for six cents, so did I.

My first boyfriend, who wasn’t a boyfriend because I didn’t know I was in love, was called Peshko. He showed me other rooms and other family arrangements. We played chess in his living room for about two years. His parents were always at work, and they had a secret drawer under one of the three TVs, which were always on. It was locked and the key stayed in the keyhole. There, under the ironed and folded tablecloths, they hid the Drunken Sour Cherries. Love and alcohol go hand in hand as everyone but me very well knew. We played chess and at the end of the last game, he unlocked the drawer, pulled out the box, gave me a chocolate, took one, we both licked the tops first then popped them in our mouths and then we stayed still. We were looking at each other’s faces, dead serious, waiting for the chocolate to slowly melt and at one final moment release the cognac with a burst so powerful, it made us dizzy and we closed our eyes.

This is how you knew that the other had reached the moment of complete and utter satisfaction. You swallowed in tiny gulps until you found the sour cherry, drenched in alcohol, and chewed it with a vengeance. This silent ritual was what I played chess for. Peshko was on that regimen longer than me and he liked to finish off with a sugar cube doused in his grandmother’s valerian drops for her nerves. Properly calmed, we moved to watching Tom and Jerry, our chess game too dramatic for our calmer state.

Peshko didn’t roll his r’s and had this soft way of saying gh instead of r “bghavo” when he let we win once in a while.  David with the hat would have said r the same way, I imagined. But Peshko looked more like the other one, with deep dark eyes and longish hair. I tried to use words without r’s around him to not exaggerate his affliction. I may have said gh a few times to blend in completely. I’ve always been good with languages.

He called the bishop in the chess game fritz but in his nice and soft way, “fghitz.” So all the fghitzes and the hoghses were gholling aghound dghunk and we were laughing at the cat and the mouse as buzzed kids and not as a gighlfghiend and boyfghiend, which we weghen’t.

I was accepted into the English Language high school, thus avoiding rolling r’s all together.  He went to study who knows what in the leather and fur institute. In Bulgarian there is only one word for leather, fur, and also skin – koja, no r’s in it. We passed by each other a year later in our building’s staircase, the elevator was out. He had a leather jacket and a girlfriend. They were going upstairs to not play chess, and I was heading down and then further down. The hair on the back of my neck (that I didn’t think I had, and even if I did, no one could possibly stand it up) that hair stood up.

I’ve always liked gentle men like Peshko and the Davids. I also like gentle women. But now I developed a Pavlovian reaction towards men who can’t roll their r’s. As soon as I hear them, I have to have a piece of candy and lick it first. So I carry a box of chocolates with me all the time. Godiva, preferably, sculpted like stomach muscles in different skin shades. Luckily for all of us it isn’t the cognac I crave.