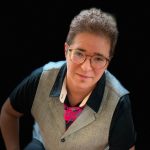 There is a father with my face

in my first city, his girl not me

adopted from a village

of cornmeal and skulls

while I, downtown bastard, slept.

She never stole my wrong-

I did not button down her wedding dress.

There is a grandfather who made

headlines for a bad reason,

his widow who admitted nothing

Though I was stewed in love

Behind barbed wire of love

was nursed a chosen hollow.

There was a grandfather who beat

There was a grandmother who fed me with fat.

She told fairy tales till she wept to death,

leaving me one nameless

photo of her sister, lost

to the Nazis, playing the violin.

There were aunts and cousins who turned away

There was a woman in boots my mother

would not admit touching.

Her broad hands shook the sand from my hair,

couldn’t teach me to drive.

She was a secret from ourselves,

paying for a home she couldn’t say she lived in.

There were her parents and her children

and her husband and her friends

and then there were not.

to grave-naked liberty by burn or river rising,

the ritual junk of generations is what’s most missed:

into the stained prayer shawl,

still nested in her veil.

Every guitar, said my father

the collector, the next to the last time

he took me to dinner alone,

is unique as a woman,

meaning unless it sings

beneath your testing touch,