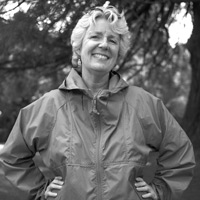 You glance out the window at the tranquil spring evening. Three stories down to the glorious almond blossoms and purple magnolias dazzling the campus after long dreary rains. Northern California heaven.

It’s been a productive, but long, day of teaching, running meetings. You’re tired, hungry for supper and a little cranky. Damn fluorescent light buzzes above your desk. Skkst. Skkst. Shots of toxin straight into the cortex. How long before you get brain cancer? Cheer up; low blood sugar brings out your gloomy. Come on. Only two more midterms to read and you can leave the office before dark.

A knock on the open door.

Your heart sinks and inadvertently you check your watch.

The handsome blond student shifts from one purple Nike to the other. His flushed face tells you he’s run here. Sweat drips along his left cheek. His right hand is fisted: tension hardens his blue eyes.

Throat clearing and then, “Are you Marcia Dunway?”

“Yes.” They never address women as “professor.” At least he didn’t call you by your first name as so many students do. “How may I help you?”

Shuffling into the office, he perches on the grey folding chair, watchfully, as if training for the FBI.

Some kids automatically pull their seats right up to the desk, lean over, elbows on your papers. Others stretch back, expectant customers. The shy ones usually alight on the edge like this.

He blinks, pops his gum.

Running with gum in his mouth, you’re suddenly worried for him.

Pay attention. You were up late last night obsessing about Mom’s accelerated Alzheimer’s. You may be tired, but your office door is open. You are a professor. He is a student. This is your job.

Closely he inspects the walls. It’s almost comical, as if he’s casing the joint. A fairly straight kid, he looks more Ivy than Berkeley.

“You don’t recognize me,” he says, deadpan, bold.

You troll through a mental album of former students. There is something familiar about the kid, but you can’t place him.

Your favorite colleague Milt pops he head in the office. “Finished at the salt mine for the day. Don’t stay too late. Again.”

He looks over the student (who is staring at you) and slits a thumb across his throat, subtly advising you to send the kid away.

You shake your head. “Have a good evening, Milt.”

“Seriously, Marcia, at the department party, Dana made me promise to kick you out of the office before dark.”

“Duly warned,” you note, hoping the student will pick up on the lateness of the hour.

“Good night, Professor Weinstein. Say hi to Eva for me.”

You turn your back to the visitor. “Sorry, I can’t remember. Please tell me your name.”

An image from the morning paper: that young sniper in Cincinnati, from a wiccan cult. Weird. You thought witches these days were good folk—pagan environmentalists, right?—something benign.

He continues to watch you, eyes full of—yes—longing.

Your patience is dwindling.

“It’s been a while,” he offers, as if playing a creepy game.

That’s it. You’re exhausted. You flip through a file on your chaotic desk, hoping he’ll get the hint.   Dana will have dinner ready soon. And Milt’s right about the dangers of cycling along College Avenue after dark.

Suddenly he mumbles. “You used to be my…”

“You used to be my aunt,” a harder edge to his voice now.

Puzzled, you study his petulant face. And then—“Artie! Artie, Roberta’s son. How are you?” He was an affectionate little boy, very attached to Brad. Adored his uncle. Yes, he looks exactly like your ex-husband’s sister. You count the years—twelve, thirteen—since you’ve seen little Artie, who, through the miracle of life is now a young man.

“Arthur,” he corrects you solemnly.

“Arthur,” you nod to the once delightful child who was a demon at checkers.

“Fine, thank you.” You’re still smiling despite his curtness. The dutiful aunt, you ask, “So you’re a student here at Berkeley.”

So like his uncle in the passive aggression. And the monosyllables. You had to pry conversation out of Brad, too, especially after he became a total pothead. For years you begged him to agree to couples’ counseling. Every night he came home from work and went upstairs with his stash to watch TV and eat junk food and giggle. You think about the shock on his face when you finally told him you needed a separation.

“It’s not working for whom?” he’d demanded.

“What year are you, Artie,” you hear that old reasonable tone you used with Brad in the last years. “Junior?”

“Sophomore, of course.” His voice is almost inaudible again. “As you remember I’m 19 now.”

Outside the sky is greying. Nearby buildings are losing shape. This is not a student consultation, more like a family stealth attack. As you know, as if you’d remember his birthday. As if Roberta hadn’t cut you off when you tried to maintain contact, even sending back Christmas cards. In those days, you still cared about Brad, worried about him, and still thought Roberta was your friend. Well, after years of therapy, you’re a little more realistic about people.

“How do you like university so far?” you ask. You are not obliged to keep chatting. But you’re surprised to find you feel a tie to Brad and his nephew, nostalgic for what might have been.

Shoving the tests into a briefcase, you check your watch again. You can’t help asking one more question, “What’s your major, Artie?”

“Arthur,” he corrects you. “Chemistry.”

“Just like your Uncle Brad and his uncle before him.” Of course he’d follow his hero to Berkeley, to chemistry.

“Glad you actually remember the family,” he smirks.

That’s it. The filling station is closed. “Nice to see you again, Arthur. I really do need to close up shop now.”

“You cut your hair.”

Reflexively you touch a short, tight coil at the nape of your neck.

“We used to call you Aunt Rapunzel.”

You laugh. Brad always loved your long curls, claimed he rescued you from your crazy family. In a way, he was right. Brad’s love and support allowed you to become an escape artist, disappearing through the haze of smoke and alcohol and out the door of your family’s tiny tenth floor apartment in the projects. Yes, you’ve always been grateful to him, even if he didn’t turn out to be such a prince. You weren’t a total princess.

Of course you returned to your family after finding your footing. These last two years, your sister Anna has been good about sharing in the caretaking of Mom. Sometimes you and Anna even laugh about growing up that chaotic, scary apartment.

“Do you still live with that Dana person?”

What is the story? Did Brad send him? The times you tried to reconnect with Brad—you were still worried about his doping—he ignored your calls and emails.

“Your partner,” he persists.

Clearly he didn’t register the banter with Milt. Enough. “My personal life isn’t an appropriate topic for a student. I wish you well here at…”

“Are you still a feminist?”

“Mom knew it. She spotted it early.”

Knew what? This kid is full of weird energy. You are tired and hungry; it’s ridiculous to feel threatened. Brad is too proud to have sent him. Arthur has come of his own accord. Imagine the whole family still being angry with you? But is it your fault that Brad has become a recluse, that for years that he’s smoked too much dope to hold down a job? Obviously divorce was a good move for several reasons.

“And I see from your posters, you’re still into radical politics. That hasn’t changed.”

Clara usually comes to empty the waste cans by now. Why is she delayed tonight? The sky is already plum colored. If you worked in a bank, you’d have a discreet button to push.

“Look, Arthur, it’s late. Is there some way I can help you?”

The little towhead ate all the wedding cake left on people’s plates. He stared at Brad with giant, admiring eyes. His uncle, the handsome, gallant groom. Since Artie’s dad died, Brad had become both father and uncle.

You think about racing Artie to the hospital two years after the wedding when he got anaphylactic shock from a bee sting.

“No,” he says in that flat voice. “I just came to see the person who used to be my aunt. Out of curiosity.”

Let it go, Dana would tell you. Breathe.

But the cordial aunt intervenes, “Drop by again if I can be of help.”

He looks at you vacantly.

Slowly, he rises, then leans back against the Faith Ringgold print, hands in his pockets, sweaty head on the last syllable of her name.

Of course it’s preposterous to think he’d pack a gun. Still, he could have a knife. You’re losing your grip. Stop it. You tried with Brad, you really did. Where the hell is Clara?

His eyes lower. “Good-bye, then.” He sounds downcast.

“For saying good-bye. I always did wonder where you went.”

He turns, walks toward the door, then swivels, waving once.

You see the six-year-old kid clapping when you and Brad picked him up at the hospital. He hugged Brad as if he would never let go. As Brad drove to Roberta’s, you cuddled Artie in the front seat, inhaling the antiseptic and sweat, grateful he was safe.

You wave back, wistful for the people you and Brad and Arthur used to be.

Standing at the door now, you watch him walk away. It never occurred to you that Artie remembered you. After Roberta cut you off, and Brad ignored the calls and emails, you tried to detach. And now you feel both guilt and sadness. For one more loss. In Artie’s life and yours.

He’s strolling down the corridor in a deliberately schlumpy gait that reminds you of his uncle who used to be your husband.

What a relief to have the current version of your life restored. Soon you’ll be telling everything to Dana over supper in your sweet rented bungalow, far from the horrible high rise of your childhood and petulant men posing as princes.

You stand in the hall until you hear the reassuring sounds from around the corner—the elevator door yawning open and then, finally, shut.

Returning to the office, you close the door behind you and press the lock before sitting down.

As you gather your papers, you feel lucky. Lucky for ten years and still going strong with Dana. Lucky to have a job you love. Lucky for California’s no-fault divorce laws.

A tap on the door.

You hold your breath.

You look out the window into the darkness, three stories down to the dimly lit sidewalk.

Breathe. You try to concentrate, run your hands through your hair. OK, grab the phone; get under the desk.

But of course, Clara has a key.