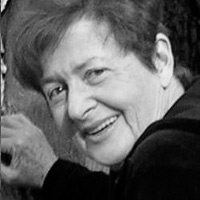 I love being someone who charges the net for a midcourt slam and surprises with an ace now and then. Which is why a fact that I never mentioned at twenty, forty, or even sixty, is now my shibboleth: “I’m a tennis player!” People look me over and say, “Wow! You still play!” and I feel powerful in the world.

I said it first at physical therapy, after my back went out (for the third time). I was lying on a mat next to an older woman spread out like a dishtowel over a large red ball. She’d been coming to PT for six months, she said, cheerfully, three times a week. “I’m a tennis player!” I said emphatically and rolled my pelvis five times, pressing my spine to the floor, as instructed. I moved closer to the young guy on my other side who was doing leg crossovers. “Two herniated discs,” he said with resignation. He’d been coming here for a year. “It’s better one week, worse the next.”

“I’m a tennis player,” I assured him, as if I were off to a tournament. He was in his forties, my son’s age, and had time to waste. I, the tennis player on Medicare, did not.

The trainer came over. “Just show me all the exercises,” I proclaimed. “I’ll do them at home,” I said, annoying him. He wanted me, and my sciatica, to come for thirty-two weeks (the length of my insurance coverage).

“You need supervision for the exercises.”

Two months later I was fine. Not from his exercises but from those I got from Jane, a perky woman in her sixties, who I met while playing tennis despite a lingering pain across my butt. “Oh, try this!” she said in the ladies locker room and got down on the rug to show me the exercise that saved her. Relax, flatten your spine and bend one leg. Put the other across it so the left ankle touches the right thigh, and work up to thirty seconds. Switch legs. Do it twice.

I got down, tried it and heard a crunch, well actually a series of clicks. I was sure that I would never rise again, but I did. And my spine opened up, liberating the nerve. “If I do them every morning and after tennis,” she said, “I’m fine.” Four months later, on the floor in position, I listen to the clicks every morning, but not as many. No more sciatica.

This exercise heads my list of top medical advice, given for free. Others include 1) Eat yogurt if you are taking antibiotics (from my college roommate). 2) Rub the inside of a banana peel on psoriasis (from the attendant in the spa bathroom). 3) Take Vitamin C if a cold is coming on (from everyone I know who is not a doctor).

I did give up playing singles tennis, except for Heidi. She’s fifteen years younger, but doesn’t mind playing for only an hour. That’s because she teaches aerobics beforehand and Zumba afterwards, and on days when she rides her bike ten miles to the courts, I can beat her.

My friends Mike and Sam, both over eighty, have weekly tennis dates playing singles and doubles. Their secret, they say, is to play by Mike’s Rules: 1) Hit the ball to the other person. 2) Don’t keep score. 3) Consider all aces as do-overs (the aim is to keep the ball going). 4) Ditto for missed returns of serve that land in the net. Both are lean, well-preserved men, an inspiring sight that I attribute to tennis. The exercise gets everything going, true. But even healthier is, as Mike says, “the idea of being a contender, of still being in the game.” Not to win (hence, his new rules) but to keep making the good shot as often as possible.

What I don’t want is to start looping the ball the way the old ladies do on the next court every Tuesday. That’s what our group calls them, “the old ladies,” because every movement is too careful and awkward. I want grace. Worse, whenever the pace of their game picks up, someone lobs to slow things down. I want speed. One day in the locker room, two of the old ladies were beside me and I saw they were not ninety. In their street clothes, they were, in fact, my age. That’s when I decided that as soon as I start moving as if some part of me will break with my next step, I’ll take up tai chi or walk a few miles along the canal, to hell with tennis.

The worry is: how to know when? A woman in our doubles group, high in her seventies, has been losing badly and steadily for over a year. She tells us she hasn’t been playing enough, needs to take a lesson or two, is having cataract surgery. We suggested other groups she could join, but she wants none of them. She will be getting better, she kept assuring us with apology—until last week. After losing three 0-6 with different partners, she said, “Well, at least we all got good exercise!” My kinder self was sympathetic: “It will happen to all of us one day.” My competitive self fumed We have to know when to quit. I recently read about how the part of the brain that cares what others think gets weaker with age. We will all go from I’m sorry! to Who cares? That is hard on grace.

My mother gave up bridge because of the tremor in her hands. Two years earlier when her eyesight dimmed, her fellow players bought an oversized deck so she could see the numbers; but this time, she kept constantly dropping her cards. Did they stop inviting her or did she give bridge up by herself? She never said, but I could see her hurt as the world closed in around her. She kept knitting by feel until she was ninety-one, but her sweaters never fit as well. And her amazing potato bread wasn’t as golden as before.

I still love her needlepoints, especially the giant blue dragon, the size of our couch, skimming on low waves of blues and white across our living room wall. Museum quality, its stitching is so fine that the dragon took her a year to make when she was my age.

She was equally proud of the framed canvas she dragged out of her closet a few months before she died at ninety-three. “Surprise and Happy Birthday!” she said, as I stared at four dull red and brown figures playing four sports—tennis, golf, soccer, and basketball—in stitches so loopy the knots showed through. She didn’t do that! Someone helped her! I thought, kissing her in shock. I put the giant thing in the windowless bunkroom of the lake house five hours away. I couldn’t throw her determination away.

Some days I lose at tennis, 3-6, 1-6, like today. I’m not worried, I decide while sipping tea beneath Mom’s dragon after tennis. I’ve had game scores like that even as a kid. I didn’t move enough, the lights glared, I didn’t have enough sleep last night. I will call for a lesson to work on my volley. Maybe I’ll have two. Whatever I need to pick up my pace and keep leaning into the ball, however hard and fast it comes.