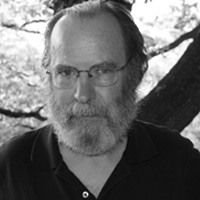 [Editor’s note: These remarks by the celebrated writer and naturalist Dale Peterson were delivered on the occasion of T.C. Boyle receiving the PEN New England Henry David Thoreau Prize for Literary Excellence in Nature Writing at a ceremony in the Bartos Theatre at MIT on May 7, 2014.]

Every college freshman is warned against cribbing from the Internet, but I’ve done exactly that. I’ve gone to the cloud to get the standard definition of “nature writing.” Here’s what the Internet tells me: Nature writing is a kind of creative writing based on the original model of Thoreau’s Walden. It’s nonfiction. It’s literary. It comes in the form, usually, of thoughtful essays. It requires that you first go into nature and sit there. Patiently. For a long time. And if an ant starts crawling up your leg: Leave the ant alone! Now take notes. Watch the ant. What does she look like? What is she thinking? What does the ant tell you about the human condition?

Oh, and by the way, you should grow a beard. If possible, let it get bushy and scraggly.

You’ve got to suffer a little. But suffering a little is a good thing, because it will bring you closer to nature. And in getting closer to nature, you’ll get closer to yourself, which is definitely a good thing. Pretty soon you’ll be swept away with the pleasure and the glory of a long, long merge in nature. And now that you’ve merged, ask yourself: Aren’t you a better person? And wouldn’t the world be better if we all just went out into the woods and let the ants crawl over us and merged? It is glorious. It’s like a massage and a colonic cleanse and a bit of Zen meditation all rolled into one—and if you combine it with pre-emptive recycling and being sure to turn off the water while you brush your teeth, you’ve done your part for nature and the environment. You can relax now and climb back into your giant SUV.

That’s where Thoreau has brought us. And so you see my complaint is not really about Thoreau. It’s about what we’ve done with him. We’ve turned him into an icon, a fad, a fashion, a style—and as a result our idea of nature writing has become stunted. It’s like the kid who smoked too many cigarettes. Our fixed impressions of Thoreau have stunted our vision of nature writing as a phenomenon. We’re still stuck in the middle of the nineteenth century.

So let me talk about nature writing as it really is or can be, here and now, at the start of the twenty-first century.

Second, there is no logical reason why nature writing should be sober nonfiction. Nature comes in many forms, and so can nature writing. Why does it have to be nonfiction prose or sensitive literary essays? Why not poetry? Why not fiction? Why not half and half, fiction intermingled with poetry? And why not deliver it in scratched hieroglyphics, stamped cuneiform, upside-down sky writing, or fungal arabesques?

My third point has to do with approach. Just because Thoreau approached nature in one way doesn’t mean the rest of us should. Thoreau was a pastoralist who experienced nature as a garden. He entered the garden of nature to merge with it. Become a part of it. That’s fine. Good for him. But isn’t it a little self-indulgent to build a cabin? Make a fire every night? Stay out of the rain? Avoid any serious dangers by living in a tiny patch of woods within the leading edge of Western civilization in the temperate zone—where the scariest wild animals are raccoons? You protect yourself from the chilly air and then, when it’s convenient, when the spirit moves, you slide your way into “nature.” It’s pastoral, all right, but isn’t pastoral itself a soft-core fantasy?

There’s another problem with the pastoral approach, one I hesitate to mention here because it’s not true of Thoreau. It is often true, however, of other pastoralists. Pastoral easily becomes self-indulgent, and self-indulgence is boring.

Fifth. Or is it fourth? Let us remind ourselves that times have changed. It’s true that when little Henry was kicking in the crib, the world contained, for the first time in history, 1 billion human beings—all of them with normal human needs and desires for food, water, energy, space, sex, procreation, recreation, and transportation. Concord was a busy place even then. Now there are between 7 and 8 billion people, all of them with normal human needs and desires. Soon there will be 10 billion—and the 75-million-year-old Amazon rainforest is now being cleared to make way for cows. The great Congo Basin rainforest of Central Africa is now being ripped apart for chopsticks.

Those of us who are active and aware nature writers, burning with the subject we have chosen and the truth we have witnessed—the truth of our bitter, bitter moment—are not, by and large, writing literary pastoral essays. We’re writing elegies. We’re writing obituaries. We’re writing polemics. We’re writing manifestos. We writing our hearts out, and, mostly, we’re not getting read, since people actually do not like bad news. People want to be entertained, and they want to be reassured. They want hope. They want comfort. They want to be told that everything is really all right. Or that it will be all right as soon as the economy gets back on track and everyone recycles just a little harder.

The nature writers of 2014 know that everything is not all right. We know that recycling is good, but it is not going to bring back the elephants, the apes, the monkeys, the lemurs, the lions, the tigers, the giraffes, the wolves, the polar bears, the rainforests and the wild world that so recently was intact and is now broken open and evanescing. The human assault on nature is the crime of our moment, and it is the fundamental subject of nature writing today.

Now let me consider one of America’s great contemporary nature writers: Thomas Coraghessan Boyle. For Boyle, to merge with nature is not bliss. It’s pain, real pain. Jump bravely into nature, as Boyle tells it, and nature will scratch you, bite, tear, masticate, swallow, digest, and surf you down the peristaltic wave until you’re turned into a sorry piece of decomposing stink that passes out the nether end of the Okefenokee. If Thoreau is the pastoral voice of merge, Boyle unveils the feral personification of merge. If Thoreau is the sober uncle and the hectoring preacher of nature, Boyle is the smart-talking stand-up comedian and the satirist, the trickster and the magician of nature. If Thoreau would lead you on to becoming a friend of the earth, an eco-terrorist who takes on the big loggers, Boyle will show you his take on the big logs, and the eco-terror that takes on the eco-terrorists.

People seem to be impressed by how prolific this Boyle person is. Endless short stories! So many novels! I’m not impressed by prolific. I’m impressed by prolific and good. I’m impressed by prolific and great. But what I think is particularly impressive about T.C. Boyle—what makes him for me a top-ranked American writer who will be remembered long after he stops remembering—is his courageous inventiveness. He’s like the high school chemistry genius who drops out, leaves home, and starts living in the ceiling of the old school’s chemistry lab. Every evening after the lights go out, he climbs down out of the ceiling, and starts mixing things. “Let’s see what happens when I mix this with this,” he mutters to himself.

He does it and, sometimes: fizzle. Disappointing. Say no more. Sadly, he climbs back into the ceiling.

But he doesn’t give up. The next night he climbs down, tries mixing a few more interesting compounds—modern Japanese samurai on the run, Southern rednecks in a swamp and out of their minds—and he drops that into the middle of a beakerful of writers: a writer’s colony boiling with precious, fragile, ambitious, backbiting writers. There’s a flash, a bang—KABOOM. Brilliant!

He climbs up into the ceiling, and the next night, he’s back. He tries mixing dead birds, passenger pigeons, Auschwitz, the extinctions of an electric light and a nuclear sun. “The Extinction Tales” it’s called—not a story, really, but rather a glowing, chilling, poetic meditation. The next night he mixes hippies in a California commune with survivalists in Alaska. And so on. This is not really chemistry, actually, but something closer to alchemy. Or maybe genetic engineering, as when he dips his fingers into the DNA bins and starts mixing people and dogs to get “Dogology.”

Reading T.C. Boyle is like looking at the world through one of those toy kaleidoscopes. You put it up to your eye, squint into it, and discover this scintillating pattern in colored glass. You twist the tube and, wow, another scintillating pattern. They don’t always make sense, these patterns, but then you twist again and instead of a scattering of colored glass you get a prism, and you see through that prism many, many things. Maybe they’re still fragmentary or distorted by the heat of artistic vision, but they’re nevertheless ultimately clear and recognizable—and I would include in those things you see Henry David Thoreau’s original masterpiece Walden.