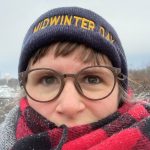 Months after Fiona Apple’s voice fills my apartment every day for weeks, I find one of her lines straying repeatedly into my head. I too used to want him to be proud of me / And then I just wanted him to make amends. It’s a line in a song about a shared secret, the secret of what it is to be with a man the singer now watches with a new woman. The song is addressed to this other woman. You and I didn’t get a witness / We’re the only ones who know. It’s not clear, even in the song, what forms the man’s abuses take. Fiona guards their shared secret, even in the love song she writes for and to the other woman. The secret the they share fills the space between the women with an erotic charge. This desire may be queer, but it’s also peculiarly tinged by the geometric arrangements of heterosexuality, its lines of force. Made an unwitting or unwilling guardian of a man’s secrets, the song’s persona yearns not for release, but to share the burden of secrecy.

Who do you protect? Who do you serve? As a heterosexual woman, do I hold some men’s secrets because it is safer for me to do so than to reveal them? I know as a white woman, I am sometimes an unwitting cop in a rigged system. In my college town, almost every car I saw pulled over was driven by a black man. Still, I was still surprised when [ ] and I walked into a store and the store owner followed us, convinced of his criminality by his skin color. What did I know, and when did I know it? All this happened decades ago. The night he called late, just home from the police station. He’d made a joke at an officer’s expense, was taken in for questioning. Was I able, then, to name my fear? They will kill you. They will kill you, because they can. You have dared them to kill you. Decades later at [ ]’s memorial, a friend who was with him that night told the story. Like me, that friend is white. Did he believe, as I did, that his presence that night kept [ ] alive for those intervening decades?

Elaine Scarry notes the unwilled secrecy into which pain initiates a sufferer: For the person in pain, so incontestably and unnegotiably present is it that ‘having pain’ may come to be thought of as the most vibrant example of what it is to ‘have certainty,’ while it is so elusive that ‘hearing about pain’ may exist as the primary model of what it is ‘to have doubt.’ Which is to say: the experience of pain cannot be reliably witnessed, at least not through language. What can I tell you of my pain? As I write this my uterus seems to lurch inside me, producing sensations of nausea as though I stood on the deck of a violently rocking ship. If the onset of menses produces similar effects for you, you may understand what I mean. If you do not menstruate, or if your body responds differently to fluctuations in estrogen and progesterone, my description may appear to you as figurative. Similarly, my imagination is unlikely to accurately reproduce the sensations of migraine, of phantom limb syndrome, of chemotherapy’s side effects. Though I might hold your hand while you suffer, I will not feel what you feel. The secret of your suffering is open only to fellow sufferers.

First there was the Shitty Men in Media list. It was leaked by one of the reporters who’d been given access to it. That list named names: it was designed to allow women to protect themselves, their friends, their interns. A bit later was Sexual Harassment in Academia: A Crowdsouced Survey. Harassers—and the schools that employed them—were often unnamed. Instead, people (mostly women and femmes) would describe experiences and provide identifiers for the schools that could, if you squinted right, confirm a suspicion you might hold about someone in your field. “R-1 in Massachusetts / History” “Canadian University / Prefer not to say” “Many years later and I still don’t want to say.” The tangle of power, intention, coercion, ambition, desire, repulsion.

In Raúl Zurita’s poem “The Snow,” the bodies of the disappeared, thrown from helicopters into the Andes, become a strange pink snowfall on the gauze of the mountains, on the snowflakes, on the small white flowers that grow at the bottom of the chasms of the cordilleras. When alive, these bodies held secrets—were imagined by the Pinochet government to hold secrets—that the state wrung or failed to wring from them by torture. In death Their snowflakes speak as they fall, as they snow on other snows. Here is love, they say, it is said to them. We speak, they say, of a new country, a new love that no one had conceived. The bodies-as-snow speak the dictatorship’s fears into being: the dictatorship replaced by a new and inconceivable country, a new and inconceivable relation of love.