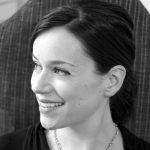 Everything welcomes you—thorny lizards,
the West Indian keeper of fighting cocks,
the fog caught in the throat of the valley.

They step towards you, or drift like airy continents,
for they know you are a conjurer of seeds,
of balances, and of the wind that shepherds them both.

Your lithe form cuts the sea open.
You spring melodies from cinnamon bark.
You mark everything with your eye, but impose no value.

Child, named after the fruit cured in oil and the salt
in its blood-brine, I wish only that you retain
the dignity of childhood, its vampiric dreams,

the thick scent of lilacs, the crayon’s desire line,
and the others of your species, who, like you, sleep
with downed knots of the divine in their hair.