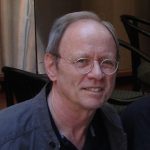 It is a scene that has haunted me for over fifty years. Someone despairing unto death is pulled back from the abyss. It is probably the most beautiful passage in Shakespeare, but in the larger sweep of the tragedy of King Lear, it can be overlooked. To take an extreme example, when Peter Brook directed Orson Welles as Lear in the early 1950s on TV’s Omnibus, they cut the scene. They had only ninety minutes, and a lot of material had to go. I hold Welles, Brook, and Omnibus in highest regard, but this was a bad error. In 1962, in Stratford and London, Brook went on to direct an acclaimed King Lear with Paul Scofield that includes the Gloucester scene. I saw this production when it played in Philadelphia that year.

It was in the early 1960s that I bought an LP boxed set recording of King Lear, performed by The Marlowe Dramatic Society and Players. I listened to this play about parents and children often, and once, memorably, with my mother, age 60 in 1962, who had recently lost both parents.

In the mid-1980s I began making notes for “Gloucester’s Eyes: A Chamber Piece for two actor-singers and two dancers, one young, one old,” a performance work that would concentrate on this moment in this most human of Shakespeare’s plays.

Then one day in July 1996 I made thirteen drawings for the scene, and added twenty syllables from Act V—changing “Man” and “his” to “We” and “our”—“We must endure our going hence even as our coming hither. Ripeness is all.”

I would add that the young dancer in Gloucester’s Eyes is manifold: in the imagination of an old blind man; as embodiment of determination to live. For Gloucester’s Eyes is a tract against suicide, specifically in the age of AIDS, in the 1980s and 1990s, when major work on it was done. Now, in light of the COVID-19 pandemic, it has more meaning again.

What is published here in Solstice is the first part of a projected larger dance theater work. The basis for the second part is an excerpt from Claudio Monteverdi’s first opera, L’Orfeo. At the gates of hell, the poet Orpheus asks the ferryman Charon to take him across the Styx so that he can bring back his wife Eurydice from Hades. The first great European opera, L’Orfeo has some of the most beautiful music ever written, and this aria is L’Orfeo’s most beautiful. It is a work I have loved for over forty years. The recording I would use in a production is by Concentus Musicus Wien conducted by Nikolaus Harnoncourt, with Lajos Kozma as Orpheus and Nikolaus Simkowsky as Charon.

King Lear (1606) and L’Orfeo (1607). Since Shakespeare was the more prolific artist by far, it may be that the two were composing their triumphs over death at the same instant, in London and Mantua.

I hope to make the second part, the Orpheus part, to accompany Gloucester’s Eyes. But for now, here is the Shakespeare part.

The 13 drawings are black pencil and conte crayon on white matte card stock, 8.5 by 11 inches.

Enter the Earl of Gloucester and his son Edgar

onto a stage suggesting a field.

Gloucester has been tortured by

his political enemies; his eyes have been

gouged out. His son, also fleeing the terror,

is disguised as a mad, naked

The father does not recognize the son.

Gloucester.  When shall I come to th’ top of that same hill?

Edgar.  You do climb up it now. Look how we labor.

Gloucester.  Methinks the ground is even.

Hark, do you hear the sea?

Edgar.  Why, then, your other senses grow imperfect

By your eyes’ anguish.

Methinks thy voice is altered, and thou speak’st

In better phrase and matter than thou didst.

Edgar.  Y’are much deceived. In nothing am I changed

But in my garments.

And dizzy ’tis to cast one’s eyes so low!

The crows and choughs that wing the midway air

Show scarce so gross as beetles. Halfway down

Hangs one that gathers samphire—dreadful trade;

Methinks he seems no bigger than his head.

The fishermen that walk upon the beach

Diminished to her cock; her cock, a buoy

Almost too small for sight. The murmuring surge

Cannot be heard so high. I’ll look no more,

Lest my brain turn, and the deficient sight

Edgar.  Give me your hand. You are now within a foot

Of th’ extreme verge. For all beneath the moon

Would I not leap upright.

Here, friend, ‘s another purse; in it a jewel

Well worth a poor man’s taking. Fairies and gods

Prosper it with thee. Go thou further off;

Bid me farewell, and let me hear thee going.

Edgar. [aside]  Why I do trifle thus with his despair

Is done to cure it.

This world I do renounce, and in your sights

Shake patiently my great affliction off.

If I could bear it longer and not fall

To quarrel with your great opposeless wills,

My snuff and loathèd part of nature should

Burn itself out. If Edgar live, O bless him!

And yet I know not how conceit may rob

The treasury of life when life itself

Yields to the theft. Had he been where he thought

By this had thought been past. Alive or dead?

What are you, sir?

Edgar.  Hadst thou been aught but gossamer, feathers, air,

So many fathom down precipitating,

Thou’dst shivered like an egg; but thou dost breathe,

Ten masts at each make not the altitude.

Which thou hast perpendicularly fell.

Thy life’s a miracle. Speak yet again.

Gloucester.  But have I fall’n, or no?

Edgar.  From the dread summit of this chalky bourn.

Cannot be seen or heard. Do but look up.

Gloucester.  Alack, I have no eyes.

Is wretchedness deprived that benefit

To end itself by death? ’Twas yet some comfort

When misery could beguile the tyrant’s rage

And frustrate his proud will.

Up—so. How is’t? Feel you your legs? You stand.

Gloucester.  Too well, too well.

Upon the crown o’ th’ cliff what thing was that

Which parted from you?

Edgar.  As I stood here below, methought his eyes

Were two full moons; he had a thousand noses,

It was some fiend. Therefore, thou happy father,

Think that the clearest gods, who make them honors

Of men’s impossibilities, have preservèd thee

Affliction till it do cry out itself

‘Enough, enough,’ and die. That thing you spake of,

I took it for a man. Often ’twould say

Edgar. We must endure our going hence even

as our coming hither.

Edgar. Ripeness is all: come on.
Gloucester. And that’s true too.
(Exeunt)