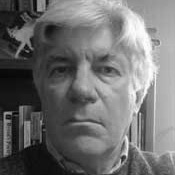 Mieczysław Jastrun was born as Mojsze Agatstein in 1903 in Korolowka, Austria-Hungary (now Ukraine) and died in 1983 in Warsaw, Poland. A lyric poet and essayist of Jewish origin, he survived the terrible years of the Nazi occupation in Poland. During his lifetime he published a dozen volumes of poetry, including A Human Matter, A Meeting in Time, Protected Hour and Memorials. He concerned himself most often with the subjects of philosophy and morality and shunned Jewish themes in his poetry (with the exception of a few poems).  However, as a poet who published his poems in resistance periodicals, he couldn’t turn his back on the horrors of the genocide; nor was he able to escape historical necessity and despair in even his most mystical writings.  Jastrun is considered to be one of the most important Polish poets of the years between the two world wars. He translated French, Russian, and German poets (including Rilke) into Polish. His work is included in Postwar Polish Poetry: An Anthology selected and edited by Czesław Miłosz.

BD: What drew you both to the poetry of Mieczyslaw Jastrun?

JF: Dzvinia and I are close friends and wanted to do a translation project together.  I wanted to translate a Jewish poet from Eastern or Central Europe. I’ve written many Midrashic poems and had already translated a book of Hebrew poems from the Bible. Dzvinia was interested in translating a Ukrainian poet. We began searching for a poet or poets whose work might inspire both of us. I knew Jastrun’s work from Czesław Miłosz’s anthology Postwar Polish Poetry and from discussions with my neighbor, a set designer from Georgia. I suggested we try translating one or two of his poems. I think we did three to begin with. The connection was immediate. Our first translations came out as strong poems. Then we were hooked, mesmerized even. But there was a deeper connection. My mother’s family came from Galicia, which is where Jastrun lived. Dzvinia also has family that came from that region, which is now part of the Ukraine.

DO: As Jeff mentions, translating a poet from Galicia, had significant personal meaning.  My parents grew up in Western Ukraine.  The language supported by the government was Polish, particularly with regard to education in the schools.  So my parents were fluent in both Ukrainian and Polish.  Although I grew up speaking Ukrainian, as was my father’s preference, my mother continued to speak in Polish to neighbors, friends, to my Grandmother.  Many words that I thought were Ukrainian, turned out to be Polish.  The cadences, and tonalities were made familiar to me since childhood.

BD: Did you find his work compelling in terms of your own concerns as poets, or did he offer a way for you to engage subjects or topics that otherwise wouldn’t be available to you?

DO: In terms of my own concerns as a poet, I’m drawn to Jastrun’s use of deep imagery, to the personal and symbolic lexicon that images often evoke.

JF: For me Jastrun offered a way to enter a poetic style that is very different from my own. His mysticism didn’t seem remote to me but his historical vision and the context of the poetry was something that we both had to explore. His poetry was informed by the Holocaust and the Russian occupation. Neither one of us experienced the Holocaust or the Occupation though we had family members who did. In my case those family members, on my mother’s side, didn’t survive.

BD: Do you both understand or experience his poetry in similar ways, or do differing ways of reading him enrich the translation process?

JF: Dzvinia and I have very different approaches to translation. We frequently discussed, debated, and argued over lines and passages and the intent of the poet. Ultimately, this constant back and forth, this dialectic, led to stronger poems in translation. In the poem “Silence,” the last passage in the poem reads:

House—who has forsaken
companions—
went up in smoke

I had come up with the last stanza through sounding out the Polish and finding a sound resemblance in English. Though she liked the lines, Dzvinia was uncomfortable with this approach once we put the manuscript together, because she felt it was inconsistent with the approach to the rest of the poems. Also, it may have diverged a little too far from the original meaning or intention. The poem had been published in a good magazine, and the editor really liked the ending. And several other poets had really liked the energy of the lines. We went around on this through several versions of the manuscript, and then right before publication, she persuaded me that we should search for a deeper meaning in the original lines, and I came up with a single line to replace what we had: “The cup extinguishes its drinker.” We both agreed that this line elevated the poem to a new level. We made this change right before the book went to print.

DO: We had to find commonality with each other as well as with Jastrun, whose poetic universe seemed remote at first. Our initial translations were mysterious and dark, but as we delved into Jastrun’s poetry, we found a startling clarity and precision, which led us to peel away the dense layers of language to get at the core of his vision, his metaphoric utterances. A voice emerged that thrived on abbreviation, on that which is both said and unsaid, highlighting the peripheries where greatest intensifications were felt.

The dichotomies presented in Jastrun’s work—for example, his search for his own faith while questioning its possibility simultaneously—intrigued us both.  The following lines by Taduesz Rozewicz which we used as an epigraph to the selection states this dilemma beautifully:

can be best described by greyness

a bird by a stone

BD: Did you collaborate on every poem, or did you each translate some poems yourself?

DO: We followed this method of working: I converted a rough draft of each poem into English, and Jeff transformed the literal version into poetry; from this point, we discussed each poem in depth, revising it, sometimes line by line, together. While doing this, we engaged in our own dialogue and debate about translation, attempting to reconcile two very different visions. Arguments for keeping a translation that was close to the original meaning of the text were weighed against possible departures or variations on the text.

JF: Translation always implies interpretation, or one could say that translation from one language to another always assumes mistranslation and the possibility of misinterpretation. Our goal as translators was to capture Jastrun’s voice and the truth of his poetry in English. We didn’t attempt a word for word reading of the poems; nor did we go in the direction of Robert Lowell in his terrific collection Imitations, imitating/simulating the poems of Pasternak, Rimbaud, Baudelaire and many others while retaining his own unique distinctive voice.

DO: We collaborated on every single poem. We translated a few poems that came rather quickly, but most of the time, we went through dozens of drafts, and hours of conversation about each poem. Oftentimes, we’d revise them together on the phone brainstorming ideas, revising lines and syntax….I’m grateful for the sacred “set aside” times for our lengthy phone discussions but equally grateful for the spontaneous “stolen” times that yielded sudden new insights into the poetry. But speaking for myself, and I hope Jeff agrees, this presented the most rewarding aspect of the collaboration:  the privilege of our continual conversation about something that captivated us both.

BD: How can an English version represent the complexities of Polish grammar? If it can’t, what can you bring to it that Polish can’t do?

JF: From the start, we knew that replicating the grammar or rhythm of Polish wouldn’t be possible in English. We first discovered a voice for Jastrun in English and then we had to discover a way to let him speak in a different language. Essentially we created a Jastrun syntax and rhythm in English. We allowed ourselves the freedom to change his syntax, his lineation and stanzaic arrangement to create a poetic style and language for him. Anna Swir said that “Style is the enemy of the poet, and it’s greatest merit would be non existence. We could say in paradoxical abbreviation: A writer has two tasks. The first to create one’s own style. The second—to destroy one’s own style. The second is more difficult and takes more time.” I really believe that this is what we went through in working on the Jastrun poems.

DO: English is a Germanic/Romance hybrid.  Polish is a West Slavic language and, except for modern loanwords from English has very little in common with English.

Translators often bear fault of including too much or, obviously, too little.  As stated before, we felt the poems thrived on abbreviation.

For example in the poem “Impressions,” the following lines:

fluffy headed fledgling bird
When you shut your eyes and see

when you shut your eyes

what do you feel

Or, as another example, these concluding lines:
I feel I see, not faith
In these extravagances, in the superfluous luxury
Death years

I can’t see or feel faith

We also made a conscious choice to make changes that would reflect the conventions of good writing style regarding grammar structure (for instance, more active voice and verbs in English rather than passive voice and noun phrases in the original).

BD: What project are you working on now?

JF: After Memorials: A Selection by Mieczyslaw Jastrun was published by Dialogos Press in August 2014, we applied for and were awarded an NEA Fellowship in Translation for 2016. We’re using the funds to translate and, hopefully, publish a second volume of Jastrun’s poetry, a parallel volume to Memorials. Most of the poems in Memorials were short lyrical pieces, but some of the newer pieces are two and three pages in length and present different challenges.

DO: As before, we continue to collaborate on everything.  However, one change that I have noticed is that the actual translating process is moving a little more quickly for me.  I’m presenting Jeff initially with a cleaner, fuller, first draft than I did in our first book of translations. Oddly enough, this is something that, as time goes on, we might resist.  We want to keep the mystery, the silent spaces.

I wanted to sleep peacefully
but my conscience flung me
awake. I shot the belly
from a man on the Cross

This wall, this air—
after the shot, emptiness
stood there, yet far

“Wall” appeared in Memorials published by Dialogos Books in 2014

Pushcart Prize recipient Dzvinia Orlowsky has published five poetry collections with Carnegie Mellon University Press including her most recent, Silvertone, for which she was named 2014 Co-Poet of the Year by the Ohio Poetry Day Association; A Handful of Bees reprinted as a CMUP Classic Contemporary edition; and Convertible Night, Flurry of Stones, winner of a Sheila Motton Book Award.  Her poetry and translations have appeared in numerous magazines and journals.  She serves as Editor for Poetry in Translation for Solstice Literary Magazine.