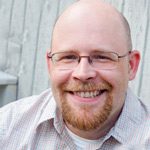 Let’s start by discussing Spite, your contribution to this Summer’s issue of Solstice Lit mag. How many times did you walk by the O’Rielly Spite House before if formed the spark of a story?

I walked by it most weekdays for several years (with my pals Rusty and Ruby), but didn’t really think to write about it until after I’d quit dog walking. I think I somehow came across the Skinny House in the North End and was like “how many of these are there?” and it grew from there.

What was the research process like for the other spite houses you feature in the piece?

I would’ve liked to visit them all in person to photograph them but it wasn’t really feasible. The research wasn’t incredibly in depth, mostly just newspaper/magazine articles on the subject. I did recently make it out to see the Pink House in Newbury. There’s an excellent lobster roll place across the street that I would recommend.

You self publish Eschew, collected shorts, and a number of other books, and you have contributed to publications such as The Best American Comics (2011). Do you write and draw new stories and then decide the outlets to pursue or do you have certain formats and themes you reserve only for your own publications?

I only self-published the first Eschew. The second one was published by the late Dylan Williams (Sparkplug Comic Books) and Secret Acres have put out 3 and 4. I usually know where what I’m working on will end up.

Panel from Spite, by Robert Sergel

Your storytelling style could be described as deadpan at times, which combine with the clean lines and stark black and white forms in your art, form a masterful and unique voice. Did this take a long time to hone?

Thanks! Yes it took some time. I started out trying to make very capital-S Serious comics but the result was pretty insufferable. Then I drew a webcomic for several years where the only goal was to be funny. It was all over the place stylistically, but I eventually stumbled across a way of drawing that I’m happy with. It’s evolved from there, but even as I’ve delved into more serious subject matter, there still seems to always be some sort of punchline.

Your finished work is so precise, is it a messy process to get there? What can you tell me about your creative process?

It’s not very messy, but it’s definitely tedious. I’m really not a natural or even particularly good draftsperson, so it takes a lot of work to get things looking how I want them to look. I use reference photos and do a lot of editing in photoshop, so it takes a long time and is just extremely inefficient.

Besides your comic voice, your unique topics are what really set your work apart for me. Is your writing process arduous or does it flow freely?

It’s pretty intuitive. Generally something will just strike me as interesting (either visually or conceptually) and the comic is an excuse to draw and/or learn more about it. Like in the case of Spite, I think the opportunity to draw all the different houses and get to know them in that way was part of the appeal. Sitting down to actually write the thing can be trickier. I try not to force anything and let ideas gestate for as long as they need to.

I first encountered your work at a table at MICE (Massachusetts Independent Comic Expo) in 2018. Many indie comic creators depend on conventions like MICE, SPX, and TCALF which, of course, have been stopped entirely due to the pandemic. What effect are you seeing from COVID on the indie comic art scene and artists in your circles?

It’s definitely been hard on people. A lot of artists rely heavily on those shows financially, but on top of that they serve sort of an outsized social function. Cartooning is a pretty solitary endeavor, so on one hand we are maybe better suited than most to spend an inordinate amount of time alone indoors, but those conventions are enormous in terms of meeting up and feeling part of a community.

Who are your comic Influences?
As a kid I mostly just read comic strips. Calvin & Hobbes was a big one. I didn’t start reading longer comics until high school and college, at which point I got very into Anders Nilsen, John Porcellino, Julie Doucet and other stuff in that vein.

Which creators excite you today?