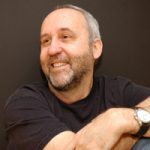 Records topple,
the Midwest melts, rippling through a scrim of heat
as though it were an illusion
and not reality.
Someone fries an egg on a shovel.
Someone else lights a cigarette on a brick.
Each day, headlines force me
to commit an act of brutal indifference.
This morning, for instance, rebel forces reached the tree
outside my window
and cried out at the expanding light.
Next door, Mrs. Neiman
called softly to her cat, and the sprinklers at Mr. Hochstedter’s  house
switched on according to schedule.
The old emperor fled, and the city fell,
leaving behind an eight-year-old boy,
scaffold of bones and protuberant eyes,
skin cracked as parchment from acute hunger.
How easy it is
to write the words “fear” or “thirst”
when they aren’t written
in your own blood.
Irony won’t help, or rage, and poetry
only makes awareness more complete.
I worry about processed meat, and the fat content of butter.
I look inside the fridge to see if we are low on coffee,
and whether
the lettuce I bought at the market last week has wilted.
Later
the ice cream truck passes, offering three flavors—French vanilla,
chocolate, and pistachio—
while I read the headline
RHINO HORNS WORTH MORE THAN GOLD.
The secretary at the telephone company is pretty
and smiles at me as she accepts my check.
I live as I have always lived,
despite the pain of others, cowering in paradise,
hoping the destruction doesn’t notice I’m here.