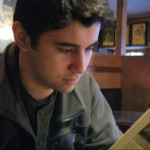 “Where are you from?”

“Well, my dad’s from Nicaragua. My Mom was born here in the States, she’s half Irish, half Lithuanian. I was born here.”

My grandma is a second generation Lithuanian immigrant who remembers Lawrence when it was full of immigrants from Europe, not the Caribbean. She wasn’t too happy when my mom married a Nicaraguan. She speaks Lithuanian, as do my mom and uncle. I never learned. Sometimes I wonder if she regrets that.

One day my uncle and I were helping her open a package. I borrowed a knife to open a box and handed it back to her. My grandma stood right behind my uncle with the knife in hand.

“Be careful with that, ma,” he said, arms crossed and head and shoulders above us both.

“He’s Spanish,” he says, pointing at me, an eyebrow slightly raised.

Her eyes widen, panic in her pupils. She says “No, he’s not!”

I didn’t learn Spanish until third grade, for my first trip to Nicaragua, but never spoke it well until high school. I’m still not fluent and speak better to those I’m not related to. On my first visit to Nicaragua my cousins tried to help me learn.

They had me read out of a textbook from their religion class. I struggled, and eventually broke down and cried. They remembered it the next time I visited, four years later. My cousin Sergio said the word lloraste in a sentence while bringing a fist to the corner of his eye, twisting it. It wasn’t in a mean or teasing way—he was just saying “Remember when you cried at my house?”

“You know, you could pass,” says David, my roommate. He’s not talking about a test. He means “for white.”

I shrug, unsure how to respond. David doesn’t get it; he’d love to pass.

Most white people think he’s black, which annoys him. That said, his skin’s still a shade or two darker than he’d like to admit. David’s Dominican, but he’s not too proud about it. He doesn’t like other Dominicans who live in the States, those in Lawrence and New York, though he does love the people on the actual island.

David is determined to marry a white woman and have a kid with green eyes. It’s part of his American dream. He came from the Dominican Republic as a toddler, endured a brief stint in the Bronx projects, grew up in Lawrence, saw his family move to a better neighborhood and is now on his way to a nursing degree. He thinks he’s earned a white wife and light-skinned children with green eyes and Irish names.

I mention my mom’s eyes are a greenish-hazel color.

I tell him I don’t care what eyes my kids have. I’m perfectly fine with my brown eyes, after all. I don’t get why David cares so much, but it’s fine—he doesn’t understand why I care so little.

Tía Sayda loves whiteness. She’s tan-skinned, brown-eyed and has dark brown hair, but is proud of her Spanish ancestry and the bit of German from her father’s side. In her opinion nothing’s better than blonde hair and blue eyes, so it’s weird that she married Berto, “the most indio-looking man in Masaya,” as my dad says.

Tío Darwin, easily my favorite uncle, got sick of this attitude and decided to have some fun. He told her the name “Ramírez” actually came from the German “Ramirshtein.” It’s an obvious lie, but Sayda bought it, much to Darwin’s amusement. She spent an entire party bragging about her family’s German roots and the great Ramirshteins, thoroughly embarrassing her daughter.

A Dominican coworker told me she thought I was “just white” because I didn’t speak like most people from Lawrence. I don’t use much slang and don’t have the accent typical of Lawrence kids – it’s like a mix of Dominican and New York accents with a bit of Boston thrown in. I wasn’t sure how to respond to that, so I just said, “Oh, right. Makes sense…”

Years later I’m on a plane from Miami to Nicaragua, waiting for takeoff. I sit next to an older woman leading a missionary youth group to Nicaragua. She’s nice, from Rhode Island, but she knows Lawrence, my hometown.

“And you don’t have an accent! Good for you.”

I’m speechless after she says this and then a man comes by and tells me I’m in his seat. Turns out I’m actually up one seat, so I say goodbye to the woman and sit next to a middle-aged man. His wife’s Nicaraguan and he’s meeting her in León. We chat about some of the places we’ve been and talk a bit about Boston sports. He tells me he’s from Worcester and I tell him I’m from Lawrence.

It’s spring break 2010 and I’m in Nicaragua on my own for the first time. I’m welcomed at the Managua airport by a few aunts and uncles. My Spanish has vastly improved. Tía Mariana, my great aunt, is happy I can actually speak Spanish. I ride back to Masaya in Darwin’s pickup truck, in the back seat with Sayda, looking at the dried-up countryside and the mountains and volcanoes on the horizon. They brag about how strong the native influence is in the area. Darwin even claims the Mayan language still survives in the outskirts of the Masaya province, but my dad thinks he made that up.

Kimberly, my teenage cousin, sits in the front with Darwin, her father. She was a little girl when I last visited; she probably forgot what I looked like.

“Parece latino,” she says to him. She thinks she’s being discreet, but my ears and my Spanish are better than she thinks: He looks Latino. Darwin gives me more credit than she does.

“Of course!” he says in Spanish, loud enough for me and the whole countryside to hear. “He’s my blood.”

My cousin Chantal is showing me around Masaya. It’s a great town, full of people and colorful buildings made of adobe, with a nice park and famous marketplace. Some damage from the earthquake in 1972 is still visible. It’s where my Dad grew up and some of his family still lives. Chantal’s only a year older than me, but I feel much younger following her, struggling to communicate in Spanish, and take in the information she gives me. I’m taking pictures of everything and joke that I hope I don’t look too much like a tourist.

Lake Nicaragua is so big Francisco Cordoba thought it was the Pacific until his horses started drinking from it. There are islands and fresh water sharks in the lake, and waves that rival any ocean. A big statue of the conquistador loomed over the lakeside plaza my parents took me to see on my first trip to Nicaragua. There Dad told me about Cordoba, the conqueror of Nicaragua and namesake of the country’s currency. I heard a hint of pride in his voice, which was odd because he had always been more proud of his native ancestors and never had good things to say about any Spaniard, dead or alive. I couldn’t understand how he or my family or Nicaragua could claim both natives and Spaniards.

“Dad, why is he a hero if he killed all the Indians?”

Dad laughed, looking the statue, and then turned to me.