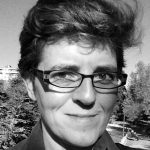 In the future, Doppler radar would bounce microwaves off an approaching storm. It would detect phase shift. It would analyze how a storm had altered the frequency of the returned signal.

More than sixty years earlier, bellwether for blood, he chooses higher ground, “the highlands” of a town adjacent to a port city. There, on a hillside, he builds his penultimate house, atop a shrubby slope of granite boulders as if to make a claim on permanence after years of melancholy restlessness. His mother comes to live with him and stays until she dies. He himself dwells in this gabled and turreted edifice until after his only child, a son, marries.

The Victorian house-dweller, given a Latin name associated with household gods, elevation, and augury, was born in the month of October, ninety-five years after Ben Franklin wrote of drawing “electric fire” down from thunder clouds. The story of conducting electricity via a silk kite attached by a rain-wet hemp string to a house key sparked curiosity. From an early age that story had attracted A. to experiments with metals, minerals, and conductivity.

He dies on a cold, wet March 1932 morning of storm-felled willow trees, five months before the George Washington silver quarter enters circulation on the first of August 1932 after a notable woman coin designer’s version of this quarter is suppressed, several times and then conclusively, in favor of a man’s.

During his last years, A. had followed rumors of the coin design saga because, true to his name, he was something of a numismatist, metals were his passion and had become his business, and because the figure of a woman’s snuffed potential continued to haunt him. A woman of beautiful mind and body. After his young wife’s untimely death from a botched obstetrical procedure at the hands of insufficiently cautious doctors, he tracked down formulas for non-corrosive metal alloys. This did not make up for the absence of the woman whom his son and, later, his granddaughter greatly resembled. Uncannily so. But, the formulas and the custom design of metal parts kept him tolerably occupied, most of the time.

Dressed in black, he ensconced himself nights in his high-ceiling study penning calculations and business correspondence at his escritoire. A fathom-length display of custom-made, non-corrosive metal alloy fittings, hardware for carriages like elaborate nautical knots, covered the wall beside his writing desk. He sat with the straight-backed posture of an admiral on dry land, sipping black tea with orange bitters. Outwardly respectable, he contained within a storm that never ceased. He said his prayers but the remembrance of septicemia as the route to all bliss offered little in the way of consolation. He was forever the flying Dutchman, house-dweller or not.

According to some, he travelled abroad a great deal, not only for business but possibly for amorous affairs. No evidence of the latter ever materialized. According to others, he was considered an aloof natty dresser, a widower with the air of an elusive bachelor. Whatever the uncertain truth, on the other side of his writing desk from the display of non-corrosive metal alloy fittings, he kept a framed photograph of his beautiful wife sitting on a boulder in the forest with their son, a sensitive child, perched in the crotch of a tree. She was holding ferns and her son, forget-me-nots. The floriography of love and remembrance before acid rain.

From March through November in that port city and the town beside it, evening thunderstorms would occur more frequently. These stormy evenings found A. at his writing desk, eyes roving over the chemistry of metals, checking his formulas for incorruptibility. Lightning flashes through tall windows would preternaturally illuminate the faces of his wife and son in that framed photograph. April was indeed the cruelest month. Almost at its midpoint, on a Thursday in 1889, eleven days after the opening of the Eiffel Tower, his wife had died of “blood poisoning” and sepsis.

He now recalls his deadness of heart, his total indifference to the international news of the Tower illuminating the great capital—to what under other circumstances would have been a focal point of his attention. That monumental Tower, eighteen thousand pieces of puddled iron, a feat of metallurgical and mechanical engineering! Across thousands of miles of ocean waves that he could almost glimpse from his gables and turret, stood the Iron Lady in place of his wife. This Lady of highly conductive metal, the highest point in Paris, attracting lightning and protecting a very large space around her from deadly electrical bolts.

To him she was and remains his inverted victory sign. His key of lightning.