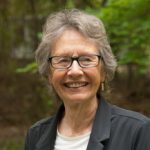 My grandmother’s hands—small and mannish—were always busy with vegetables. Potatoes mostly, although I remember the snap of fresh green beans as she clipped each end with her thumbnail, and then the plop as they met the bottom of a Pyrex bowl. She could peel a potato with one motion, round and round until the thin coil of skin dropped into her aproned lap. Then she sliced. Resting the potato in her left hand, she gripped a paring knife in the fingers of her right, and slid the blade through the vegetable’s flesh toward her own. Again and again she drew the knife to her thumb, day after day, year after year.

In my memory she is always old—compact and faded—her long white hair pulled into a loose bun at the back of her neck. She smelled of the Jergens lotion she rubbed into her callouses, and when she looked up from her rubbing, or mending, or peeling, she would break her somber expression to smile at whatever my sister or I wanted her to see. She called me “lilla honey,” splitting, as always, a sentence or a phrase between her native Swedish and her foreign language.

She was like so many other old Swedish church ladies who chatted in lilting tones about which body part was currently failing them. We kids called it “the organ recital.”

The day President Kennedy died, my grandmother sobbed for hours and declared she would move back to Sweden where nobody would think of killing the king. More years passed, as she sat, mostly in silence, bundled in a wool knitted shawl, one ear turned toward the old table-top Zenith radio in the dining room, until she faded away. She was 81.

My 50th birthday. Rich and I hike the soaring cliffs of the Na Pali coast, our calves straining into the mountainside as we wind through dense tropical woodland. Pausing to catch my breath, I hear the soft padding of footsteps behind me, and turn to see a diminutive woman with full daypack trotting up the trail. She’s in shorts and sandals; as she breezes past us, I notice the deep lines crinkled across her face and the gnarled hand that clutches her walking stick.

“Aloha,” she calls out in a bird-song voice, and strides on up the trail.

“I want to be her when I grow up,” I whisper to my husband when she is out of earshot.

My mother lived to 90. She spent her seventies caring for my father as Parkinson’s disease gradually drained the life from his body. In the early years of the disease, before the wheelchair, on an average day he fell at least once, and she would brace her 100 pounds against his six-foot frame to help tug him up from wherever he had tumbled. He had been an athlete as a youth and knew how to fall with the least chance of serious injury; she was determined for them to lead a “normal” life.

I called one morning. “How was the concert last night?” I asked.

A pause. Then, “And a very nice man pulled us out of the gutter.”

I snuggle in a frayed afghan on the small screened-in porch off our bedroom. It’s a full-moon night, fireflies flash to the murmur of Rich’s unhurried sleep.

My 95-year-old aunt’s voice whispers, “The only cure for restless legs is ibuprofen and a bowl of Cherry Garcia.”

Blue moon. Strawberry moon. Harvest moon. Something about a moon and a love poem you no longer remember. I creep to the office to find my iPad. Google. My fingers, backlit by the glow of the screen, are my mother’s fingers—slender, nubbed at the knuckles from arthritis, the nails still strong and shapely. Now, what was I searching? Ah, Billy Collins. A moon poem. Of course.

Both my mother and grandmother suffered in their final years from dementia. “Hardening of the arteries” was the cause in my grandmother’s day. Mom’s daytime version at first was a generic memory loss that left her befuddled, but content, most of the time. When her anxiety rose in the evening and she rolled her wheelchair to the dresser, flinging the drawer and its contents to the floor so she could pack and run away with her imaginary boyfriend, the nursing home staff called it “Sundowner’s.”

I’ve watched
dementia, or lived it,
like someone watching
the fading taillights
of a loved one’s car.
I’ve chased
conversations, clinging to
moments, hoping to slow
the slide into darkness.
I’ve grasped
at flickering connections —
so many I can’t remember
which one was the last.

I am enrolled in Medicare, another milepost along the aging journey. As I write this, a woman at least my age is vacuuming my upstairs carpet. When I splurged on the cleaning coupon, I expected the company to send a younger person, someone whose lower back hasn’t bent and stretched as many times as mine.

My mother’s voice says, “You could have done it yourself.”

I struggle to find models for aging, for somehow blending the disparate elements of rage and graceful submission into a composite to carry me through the next phase of life.

The women of my heritage knew it was hard work to grow old. They lived a long time, tackled whatever life tossed their way, gradually let go of dreams and plans, then gently released their grip on the world around them.

I find myself slicing the vegetables into my thumb, stubbornly, the only way I know. I see no blood in the salad, but my own voice tells me I need to switch to the cutting board.