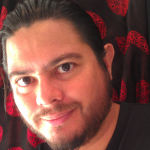 The 7th sequel, of a book, movie, video game, or potato chips, gets a Chicano version. We get tossed a limón y chili encrusted bone by a white guy in Day of the Dead makeup shouting: MEXICANS TAKE NOTE, BUY OUR PRODUCT, WE ARE LIKE YOUR GRANDMAS! This is American Psycho’s Chicano version. A brown knockoff of the book by Bret Easton Whiteguy and the movie with Christian Gringo Batman as a yuppie going around killing people, getting away with it and humming shit pop songs. A version not even direct to video, just direct to your dreams.

Mexican American Psycho, the book, wouldn’t get published. It’d be critiqued by friends, publishers, and agents, who would slowly explain to your brown moronic ass that people on the east coast wouldn’t want to read it since it’s now set, in all places, the Chicano homeland. People would crinkle their judgement in front of you and say, why don’t you write something original?  YOUR OWN STORY. Like were you in a gang or about your sister’s quinceañera? I’m totally obsessed with tacos, how about a taco book? Magic aliens are hot right now…–What you have a magic alien book? The main character’s name is Carlos? Well, no, that won’t work. Can’t you make him normal?

If the movie ever did get made, it would be by white producers who’d get a ‘cultural adviser,’ probably their maid or their gardener, just like the movie Coco. The producers would think it’s racist to think their white actor, Ryan Gosling, can’t play MAP in brownface. Ultimately, the movie would get a new director and a rewrite and be called the Home Depot Killer. The trailer would show MAP bursting through the drywall on an unsuspecting Anglo family at dinner.

If you are reading this aloud, it will be apparent how laborious saying Mexican American Psycho becomes. You can’t really Hispanicize Patrick Bateman, just like my own name, Scott Duncan. Alternate between saying Mexican American Psycho and saying Scott. People treat me like a psycho. Whether at office hallways or the end of my driveway people go from demanding, “Can I help you?” or “What are you doing here?” in the day to slumping in terror at night, fumbling for keys, pushing on doors that don’t seem to care that a Mexican American, psycho or not, is approaching. Say Scott. Say M.A.P. Say what you think will keep me from biting off your nose.

There has been a Barrio Psycho, the Night Stalker. Richard Ramirez. The little TV hung up in the corner of my grandparents’ place in El Monte where I went every summer, including 1985, kept barking out things like killer at large, the Night Stalker remains at large, WATCH OUT SPICS. People still came over, my grandma gave them iced tea and joked loud at the table, “Hey, I’m a feeling a little lonely tonight, I’m gonna leave the window open.” “Híjole, Merce, you’re so bad. Estás loca.” I frowned and looked out the window, at the rays of the sunset turn neon in the LA smog. My cousin Vicki told me the boogie man would get me that night. Aunt Lydia said I was too old to be afraid of that kind of crap. I said what about the Night Stalker? They didn’t say anything, and they still left their door open in the back that was next to grandma’s place since everyone went in and out so much, including our security squad of Chihuahuas. Why was no one worried? Barrios Psychos get caught when they kill or almost kill white people. Like the Night Stalker. He slipped out of Hispanic terrors and into Anglo’s nightmares and that was one slip too many.

MAP can wander in the Latin Lover skin like a priest of Huitzilopochtli or a gay Hollywood actor and survive until he lets himself go by aging, then he has to kill again. People get turned on by killers. A friend of mine, a valley girl, said she had a one-night stand with some guy who brought pizza and she made him keep the Night Stalker documentary on. “I mean, like his teeth was gross?” she told me, “But fuuuck, the Night Stalker was like so hot.”

Mexican American Psycho would be an assistant manager at something like a Blockbuster, if they had those anymore. A place of a dying industry he could have encyclopedic knowledge of (like Richard Ramirez of serial killers or American Psycho like bullshit hipster music). If you walked in his Blockbuster store, it’s over bright, though only in the front. MAP could show you the who’s who of Brown Hollywood. This person was Chicano, they dyed their hair, changed their name to maybe something like Scott Duncan or Patrick Bateman. This one bailed out the Sleepy Lagoon people. These are the Puerto Ricans who take all the Mexican roles and leave the scary ones to Danny Trejo. My distant cousin was Elena Verdugo. A hunchback was in love with her, though she loved the Wolfman in House of Frankenstein. Once I sat in the weirdly quiet audience before a Morrissey concert started in London, in the steepest oldest, you could fall down 50 feet if you only stumble a bit stadium. Down below, on the center screen as good looking heart throbs in black and white posed in obscure films, one, a recoiling gypsy, made me think—she looks just like grandma. She was grandma’s cousin. We were her poor Mission Indian relations. Mexican American Psycho finds bits of himself that have been ground up by US imperialism and flung throughout the world, though he still hears phrases like “immigrants like you,” in a place his family has been for 10,000 years.

In the back where he leads you, the unsuspecting sacrifice, to the store room of his secret stash, MAP shows you the VHS covers depicting those who are meant to be like him, hair straightened, names anglicized, face heavy with powders, and those who are also meant to be like him, hair dyed black, grease spread on their face with grimaces, women recoiling in their grasp. What is real he asks? He might live back there with the secret stash. He can’t afford his native land anymore. Everything is covered in plastic, not because he is rascuache, though he did pull everything off the street and repair it himself, but the plastic, which rejects blood, ketchup, sex and salsa stains, equally protects against deterioration, which is what he fears most. You sigh loudly you are good to go, you are ready, let’s do it already, but he yells back from the bathroom he needs to practice Duolingo and count white hairs.

At the work lunch, you think MAP is okay with the beaner jokes because you called yourself a stupid gringo for loving tacos at this place so much. MAP doesn’t work at Blockbuster anymore, but it’s all he talks about. You wear a serape you got in Arizona and brag how much you can handle hot sauce and that your white ass grandma was part Cherokee. You insist he tries the super autentico salsa you love so much. He tastes it, says it’s okay, brings up the napkin and spits it out deftly. He brings out his. Wow, everyone, says, that is great. That really made this taco. The smooth after burn, the what is that? Makes me think of ranches, you say. Randy, the guy who lived in Costa for a few years and has a blockish beard and Wehrmacht hair, pulls out a bottle. I got this from a little shop down south. Everyone tries a bit, MAP pours a line on his fingers and licks. The edge like a slap in the face by a high dollar Dominatrix, the middle like an abuela’s love, the first ending like a scolding by a much older man, and the aftertaste like the burned deserts of Aztlan and a thousand rattlesnakes. MAP snorts. I’m allergic to tomatillo, he says, and pushes the small plate away. His left hand grips the table, ripping the paper covering.  “Randy,” he says, “it’s just like my grandma’s,” and gives Randy a look that makes you think Randy might die tonight. You wonder why can’t MAP be more like Randy? Randy’s totally into this Mexican stuff and doesn’t have a weird identity crisis.

American Psycho is what MAP and everyone else is supposed to aspire to be, a wealthy young white murderer who gets away with atrocity, by virtue of his whiteness, whining he deserves all, no matter how many victims lie in his wake, how many women he torments in nightmares like Freddy. Trump is too much the venal clown to replace the soulless demon that was Reagan for the ending, the revelation of the true villain like in the original book. Not Trump, but Kavanaugh is the monster on all TV screens at the end of MAP the movie that never gets made, the book that never gets written. “There is nothing behind his eyes but hate!” the yuppie with Wehrmacht hair admires.

In a blood-drenched corner of a Blockbuster undergoing renovations for lofts, the back cover of a discarded VHS tape reads:

A fragmented self, portrayed and chased as an animal, Mexican American Psycho is an impossible reality. He is here. In your dreams. Bursting through drywall.