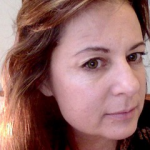 As usual, you are trying not to eat too much. You already told yourself that the bite of bagel and cream cheese your daughter left on her plate at breakfast was enough for you. You might even skip lunch, you thought while chewing it. But the truth is you’re weary of all the psychological taekwondo you do in an effort to keep what’s left of your figure, which by now is mostly held together with Spanx and the occasional lucky bout of flu.

Just coffee, you tell yourself, but what looks good on the café menu is the toast with oatmeal. This is a little like an egg with an omelet, but you order it anyway. Somebody thought it was an idea. Somebody wrote it up on the chalkboard in delicate lavender chalkings, the “L” in oatmeal ending in a silly flourish, as if to emphasize the curious combination, the greatness of the idea: toast, and oatmeal! Is that allowed? The lack of contrast is subversive.

A flourish, yes. Why not? The other thing that looks good is the lovely woman behind the counter in the Che Guevara t-shirt. How old is she? Thirty? Her tattoos wander down to her wrists, her smile is bright, and when you fumble for your credit card, apologizing for nothing in particular, she laughs in a nice way.

Why aren’t I a lesbian, you wonder. Is it too late? You imagine being her partner, the sweetness and the fun. The way she looks, like a delectable something or other. Of course, this is shallow and ridiculous of you. You don’t know her, she’s too young for you, and you’re no better than man, with your co-opting of her beauty, the way you glance at her and away again, sneaking sips of her prettiness.

Generally you object to certain people looking at certain other people for their own weird reasons. You have a both a daughter and a stepdaughter, and mentally you keep your nails sharpened to gouge out roving eyes on their behalf. Your daughter headed into the doors of her high school this morning in an outfit that made you see her through your own mother’s eyes: in my day those pants would have been ripped up for rags, missy. What are you, a circus performer? Your daughter’s tiny waist was fully exposed, a nip in the healthy column of fifteen-ness.

“People will see your belly button,” you had said, as mildly as you could.

“Everybody has a belly button,” she said back, even milder.

You thought of your own belly button, where you could now comfortably store a penny, or even two, and wanted to laugh. Was your waist ever like your daughter’s? You remember a seamstress, long ago, admiring your figure. Darling, she said, crawling in a circle at your feet while she pinned up the hem of a full skirt she was making for you out of silk. The skirt was for a dance and you were nineteen. It was pale, a girlish color. “Like butterfly wings,” the seamstress said, stroking the fabric, and then a minute later added shyly, “Some people say if you see a blue butterfly you can make a wish on it.”

Ah yes, wishes. You were pretty then, and people made all sorts of fleeting, short-lived wishes about you. But you forgot to make your own wishes, didn’t you? Too worried all the time about the wishes of boys and then men to think about what you wanted. That worry, that unhappiness seemed like desire after a while. You confused them with desire. So much worry! And for what? This morning you were rather glad not to have time for sex with your partner of three years, a lovely man with whom you have blended your three children into a fine even froth. A house on a hill, tenants in common with rights of survivorship, a fine lawn for badminton. You often talk of having a party.

Perhaps you’ll invite the woman behind the counter to a party. It will be like a movie, like a book, where the elegant and reserved older woman is swept into sexual passion—and love, don’t forget love!—with a lovely young thing with tattoos (is that a horse? A dragon?—oh god, please not a unicorn) and big Chiclet-shaped white teeth, and mesmerizing talk of changing the world.

You eat your oatmeal, dipping the toast in it, and turn the pages of a newspaper. There’s lots of butter, whipped butter, and a big pitcher of cream for the oatmeal and brown sugar. It’s excessive but it seems just right. You might have to leave her in the end, though, you’re old enough to know that. Even if you buy local handiworks together, eschew pesticides and save bees and anything else she wants. Even if you use natural sea sponges instead of tampons, and squeeze them out on your xeriscaped yard before going inside with her to lie down on slippery sheets that count their threads by the thousands. The whole thing might one day suddenly strike you as ridiculous, the way men, now, often, strike you as ridiculous. They didn’t use to, and now they do. There’s a picture of a bunch of them in the newspaper you’re reading, the so-called president’s cabinet: dull, dumb, white faces, each the size of your fingernail, with which you’d like to poke right through them.

The woman comes out from behind the counter to check on the progress of your breakfast. She wants to know if you are enjoying it. You look at her. “More than most things,” you say, holding up your piece of toast. It doesn’t make sense, either as a reply or as a form of flirting, and she goes back behind the counter.

You try not to look after her.  Your face is hot. You don’t have a sexual orientation, you realize. You were just swept along, without ever having a chance to know. Awkward is your sexual orientation. You think of the seamstress again, for the second time in twenty-five years. She was swept along too. Her grunting husband sat in the front room behind a quantity of cigar smoke, staring at nothing, you remember that much. She took your hand in hers and pulled you past him to a back room whose one window faced the wall of the next house. A little tree (she must have planted it herself, you that realize now) lifted its few branches in the constricted space between the buildings. You were the same height as the tree when you stood on a little step stool, your arms akimbo on your own tiny waist. Its buds were new, just pink daubs here and there, starting to break through the shiny brown bark. You watched the top of her head as she circled you on her hands and knees, murmuring endearments and sliding silver pins into the slippery fabric. It was hard to keep your balance and she put her hands to your thighs, steadying you. You looked out the window, blinking, pretending that she was some dumb boy, Nick or Chip or somebody.

Make no mistake, your blended family-man leaves nothing to be desired. You’re lucky to have him. He is, in fact, the green grass on the other side of the fence, the green grass everywhere. He has no tattoos, no unicorns roaming across the fine skin of his smooth body. He calls you his brown-eyed girl, and every time he says it you are both thinking about how old you are, how very much not a girl. You are learning, the two of you, to grow old together without growing, you know, old. It’s a fine point, and you’d like to write it somewhere, in lavender chalk maybe, with a flourish at the end to make it true. You are still quite young, considering how old you are. There’s still time, you sometimes think.

She clears away your plate, says something about the weather. Rain again, and you both agree it’s getting tiresome. She’d crawl through broken glass for a sunny day, she says, and you wince at that. You think of her tender knees and then, abruptly, the seamstress’s knees on that wooden floor, and the red spots on them when she finally stood. Why didn’t you see the truth? The way she took your hand and led you by her husband, treating him like a landmine, skirting him and escaping with you to a place he couldn’t see. Why didn’t you feel it then? You could have gone in a different direction, not swept along at all, you could have made a choice.

She’s stacking dishes behind the counter, click, click, click, then making the espresso machine keen. Darling, I’m nearly old enough to be your mother, you’ll have to say to her, sternly, and she’ll weep. She really loves you, in this movie in your mind. She takes you so seriously! Too seriously, since it can’t go anywhere, obviously. It’s intense, thinking of it, and you find that your hands are pulled into fists in your lap. For a moment you can’t take a breath. Your heart is squeezed in a too-small space between a wall and a house with a man in it. There is nothing wrong, really, not specifically, it’s just that you are not blooming, that you have never bloomed, and that you forgot, for all these years, to find that painful. You can’t inhale. It will hurt too much, so you try not to need any air. You’re stuck, waiting for something, remembering the way her blue eyes filled up with tears that couldn’t quite spill over when you left her, the wind catching at the screen door and banging it a few times behind you, hard, harder, like an angry ghost.