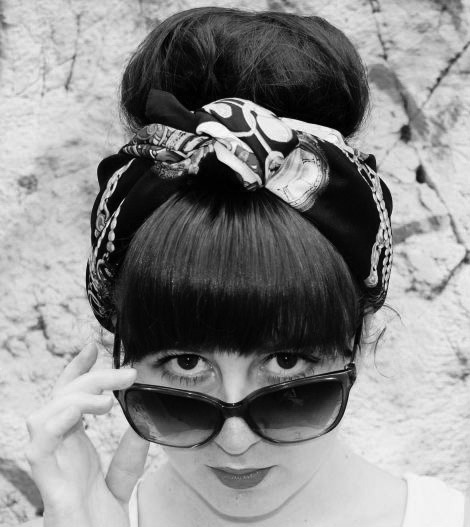 Kel had been waiting for Ando for half an hour, sat outside the chippie on the kerb.

School bus had been and gone and Kel hid behind the wheelie bins while it went past. She spat on the tarmac and inhaled again. Spit, smoke, blow, spit, smoke. You always have to spit after you tek a drag—if you’re doing it right. If you learned how to tek it back without bum fucking the fag end. It was sem as sucking a lad off: You had to get your lips in position and your teeth tucked away and you had to know how to tek it down without coughing it back up.

The kerb was fat with a glob of saliva but Kel’s mouth was empty and raw. Kel dug deep, and forced all the flem from her nose backwards down her throat. She leaned over and spat slow this time. A long loogie trail clung to her lips, dangling in mid-air the way a spider travels downward on a length of web. She let it go and it joined the puddle, which shined glorious between clumps of chud and a stray chip, smushed flat.

Kel had the pose mastered, too. Arse on the kerb, legs apart, hands hanging off the knee caps like dead things. And if you spat through the gap in your legs and squinted at everyone going past you looked hard as fuck, an’ all.

Shaz and Rach got on the bus. They’d be sat in form now, listening to Mrs Wardle talk shite, the daft bints. Kel was nearly sixteen anyway; if they thought they could mek her go when she didn’t want to they could get t’fuck. No one could mek her do owt.

When she’d smoked down past Last Drags to the filter, the bit that tasted chemical, Kel practiced flicking the fag end, trying to launch it off her thumb the way Ando did. The cherry fell between her fingers and kissed her skirt, leaving behind a perfect round hole.

She grabbed the butt again and squeezed it flat between thumb and index, then she rolled back her finger until the nail was angled right behind it and flicked, sending it in a long arc across the road.

Then Ando was coming at her across the street, and Kel had been concentrating so hard on the flicking that she hadn’t seen him. He dodged the butt like a football tackle.

“Oi.” Ando stopped above her. “Nearly got me fucking trainers.” “Sozzard.”

“Will be sorry if you burn me Nikes, lass.” His cap cradled the back of his skull like always, peak pointed at the sky behind his gelled-up fringe.

Kel felt too small sat down on the kerb; the thick oil smell from the chippie mingled down there with the piss-and-vomit combo aroma that clung to the pavement in their part of town.

People turn to poison quick as lager turns to piss Lovers are physically sick every time they kiss.

That was Kel’s favourite time in GCSE English, when they had to read this bloke who Sir reckoned was a poet, but all his poems were full of swearing and stuff about drinking and fucking. Kel remembered those lines every time she smelled the streets.

Ando lit his own fag and adjusted his ball sack with his free hand. It was at Kel’s eye level, a malevolent bulge.

“You just gunna sit there like a mong or what?”

He always called her a mong, or a dizzy bitch, or a daft bint. He never said owt like that to the other lasses, though, so Kel reckoned it med her special.

“That’s for me to know,” he said, but his eyes wandered over to the snicket that ran down the side of the chippie.

“Oh aye,” she said, with an arched brow. She’d been training her face to raise just one— the left one with the scar where her stud had grown out.

Kel thought she knew what Ando was after. They’d been banging for a month now, but they’d hadn’t done that yet and she knew from what Shaz and Rach had said that he’d done it with other lasses before her. Kel dug her heels into the ground and pushed herself off the kerb. Ando forced her back down with a quick hand, wrapped a leg around her head and dry humped her face. The bulge, covered in tracksuit sheen, bashed her in the teeth. Laughing, Ando pulled away, dragged her up by the wrist and force kissed her cheek. She slung an arm around his middle and they walked away from her spit puddle and down the snicket.

Behind the chippie was a tall wire fence, black with age, sharp points all over. “Giz a leg up, then,” Ando said.

The fence was twice Kel’s height, and her school skirt was after-school-detention short. She held out her hands. Ando stuck his boot in them and pulled himself up, then she scrambled after him and swung her leg over the top, scraping the skin inside her thigh. Ando laughed as her leg swooped over and her skirt flapped back. Kelly’s cheeks flashed red and she scaled the other side of the fence with one hand holding it down.

Next there was branches in Kel’s face as Ando pulled her further and further in, until they stopped by a tree with a deep fork in the trunk. Nettles poked out on either side of it and they reminded Kel of when she forgot to shave and her pubes bushed out either side of her knickers.

She did know what he was after—he wanted to shag her, el fresco. A shiver ran through her when she thought about how her mam would react. Mam, who kept going on about how she was embarrassing herself, dragging her knickers through the dirt. Common as muck that lad, she said. Common as fuck.

There was nowhere to lie down where there wasn’t nettles so Kel pulled her thong to one side and positioned herself in the nook of the trunk’s two arms. More like fingers, she thought.

More like two massive trunky fingers telling the whole world to get fucked.

Ando pushed himself against her and she was still dry but he forced his way in. Her bare arse chafed against the bark and Ando’s dick was angled so it missed the parts of Kel’s anatomy that would have made her feel summat. She knew how it was supposed to feel—it had happened once with another lad, by accident—but she didn’t mind. The thrill was in watching Ando’s face as it slackened and stared off over her shoulder. He was hardest lad in school and no one would say otherwise, but when he came his whole face changed and Kel saw something different—a softness that wasn’t there when he was doing that sideways rolling walk they all do down the street in their Rockport boots and their Kappa jackets.

The pause right afterwards was the best bit, the bit when he held her for a second and she felt proud.

As usual, she crossed her fingers that he’d be done before she got red raw and every thrust was like getting fucked with a Swiss Army Knife.

While Ando entered and reentered her, Kel thought about how she’d never come face to face with his cock, never looked it directly in the eye. The fat end of it kissed her insides over and over, but she only caught glimpses when it flopped out of or back into his boxers. She didn’t know why, but she couldn’t look at it straight on. Maybe it was in case he caught her and called her a perv.

Ando sped up, and she knew it was nearly over. Head back against the tree trunk she closed her eyes and moaned along to his rhythm.

But then he stopped himself and pulled out of her.

Hands either side of her waist, Ando gripped her and pushed downwards. Instinctively, Kel resisted, tensed up her stomach and held her ground. She looked at the nettles around them, sprouting up everywhere through the dirt and the rocks. Nobody stopped being scared of nettles, she didn’t think—they hid between the harmless weeds and waited for a flash of bare skin. The slightest brush with them left hot white bumps all over that stung worse than a fag burn and lasted days.

“Go on, then,” Ando said. There wasn’t any softness in his face.

For a second, Kel felt like she did that time her dad lost her at the fish market when she was four and everything was like dark water with lights reflecting off it and the people running by were a current that was trying to sweep her up and away, and the long shadows all around her waiting to throw her in.

Ando smirked but didn’t let go. “I thought you were all right.”

Then Kel stopped pushing back against the pressure of Ando’s hands and let him turn her around and shove her down. The front of Kel’s legs fell full into the nettles and she could feel the bumps forming but the sting was on delay.

He forced his way back in from behind and pounded, bashing her skull against the tree until he stopped deep inside her, exhaled in her ear.

The pause, when the world stopped. Except this time Kel’s legs and palms vibrated with the coming pain. She sat back on her knees and looked at her hands—skin rough and raised like braille. She got to her feet and brushed the dirt off her white school blouse.