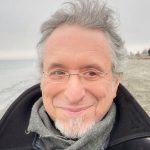 My daughter writes, to all those
who follow her on the web, my eyes

are the same as my father’s. She means
to reassure herself they are not
so strange. But mine are a stranger’s
eyes, as were my grandfather’s, open
late like the immigrant grocer’s lit
with the awnings up after midnight, eyes

whose lids jittered in sleep, disturbed
by the deep vigilance behind. His eyes

kept watch for his loved ones’ safety,
spied 60th & Cedar from the porch,
scoured the faces ahead as we advanced
through Rittenhouse Square or 30th Street
Station or down 54th toward Murray’s
for Nova and whitefish on Sundays. Those eyes

adjusted the unspoken levels of risk
by the millisecond. I saw the near-
imperceptible grimaces of that business
on the live graph of his face as he squeezed
my arm for no evident reason again
in the A&P checkout line. And when he did
let his eyes close over for a brief drift
into the night, he had his ears
take a shift. Listen, how many sounds
in a quiet row house could be something
metallic and honed as it’s slipped
from its sheath of hide. My grandfather’s
ears would quick wake up those eyes

adapted by our centuries of practice
as unwelcome guests. Such eyes’ irises
dilate for dark coats against starless black.
They diffract silhouettes on horseback
or mufflered motorbikes. These lenses
detect unmarked vans through the rain-glazed
glass of coal-dusted panes as those wagons
kill their lights and roll on to park
beneath our apartments. These eyes

are the same as my ancestors’ scanning
the dunes in sand-wind after dusk.
I look at my daughter’s eyes, the electric
pic by the quote on her posted page.
She’s wrapped in an easy embrace
with a friend. I see the ages’ squint
no joy can erase. It’s the inherited
readiness. To make my peace with it,
I say this: her eyes, our eyes,

must also have earned the keenness
to discern that secret search for trust
in the lines, the clench, the twitch
of the wanderer’s face. The fresh-arrived
clutch of strangers, terribly dressed,
kids pulled tight against shawls and prints
by parents’ spasmodic grips, bus schedules
out under lowered brows, eyes kept
down but we catch them lifting for glimpses
into what’s imminent—our eyes

grasp in those instants, they’re not our tribe,
but we know them as kin by their eyes.