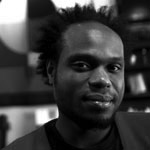 Editors' Notes
by Jamaal May

Poetry movements are, by their nature, inherently about a narrowing of possibility (let’s all stop doing that and start doing this). What tends to follow such narrowing is a synthesis between 1) what the movement brought into relief, 2) whatever movement it was a reaction to, and 3) the wildcard possibilities explored by daring new poets. When the neo formalism movement subsided, we were left with a field in which the embargo against received form was lifted. It is now no surprise that this issue of mostly free verse also contains a contemporary sestina and sonnet from Stevie Edwards and Sean DesVignes respectively.

I am grateful to be joining on as co-poetry editor at such an exciting time for American poetry. Many boundaries are being crossed, blurred, or obliterated, even while particular styles and aesthetics maintain their fidelity. One need not look further for proof than the conversation that poems by 20-something writers like Nathan Slinker and Franny Choi are having with the 90-something-year-old Simon Perchik. Perchik, who has been described by Library Journal as “the most widely published unknown poet in America,” has an ear for language and unique syntax that, for me, fits well into the shifting, unromantic, but personal lyric style that has me so excited about the next generation of fire-thieves.

As I said to my colleagues when signing on, I have no delusions that I’ll be able to fill Kurt Brown’s shoes, but I hope to make some worthy footprints alongside his.