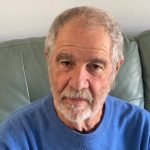 But it is a mild, mild wind, and a mild looking sky; and the air smells now, as if it blew from a
far-away meadow; they have been making hay somewhere under the slopes of the Andes,
Starbuck, and the mowers are sleeping among the new-mown hay.
—Moby Dick

I’m sitting by the pond
where the woods almost reach the shore,
my back against a pine, cool in its shade,
reading the last few pages of this hell-fired book,
with its reek of blood and salt,
and me, drowned in harvest smells, here
in the inconstant Berkshires, near Arrowhead,
where he carried his oar, like Odysseus, far from the sea,
where he wrote under Greylock’s dark brow,
only a few miles from Nathaniel:
his secret father and more secret love
whose heart he wished would beat in his ribs with his.
But Nathaniel’s aloofness gnawed his soul
that longed for him and loved him past longing and loving;
Nathaniel’s puzzled, careful regard, perplexed at his raging need
to embrace him in the shattered fragments of the godhead
and his restless search for a ground of belief, or unbelief,
god-estranged, raising a wall between them.

He began this book on a winter day–
bitter as the day the Pequod sailed–
anchored in the uncertain lee of his inland harbor
where his words plotted their own course,
driving him through a Berkshire summer’s humid hell
and back through winter and into summer again,
ruining his eyes on the endless watch
from his landlocked masthead,
waiting for the Father to breach,
who had died, driven mad by bankruptcy and brain fever–
his grim, crazed, ruined, ranting captain,
loved and feared, eternally sailing before him–
his level lodestone, his sextant and his polestar.

I sit here, my back against a pine’s rough trunk
with the ripening field’s golden odor drifting between the trees
with the sweet smell of hay drying on the haymows,
bound over to this book,
pages rippling in the breeze like flames,
within shouting distance of where he wrote,
far inland from where he had launched himself
from freezing Nantucket ten years before,
wondering how–in the midst of these mountains,
whose change each year from light green
to a green deep as deep dreaming,
to autumn’s bright mortal strew,
to the winter’s still monochrome–
he could imagine the fickle sea
in that room where he sat, writing all day
until Elizabeth’s no-nonsense knock roused him to dinner
and the daily comfort of feeding the horses and the cow:
a safe harbor after tacking into his storm,
self-given to its gales and currents,
its rogue waves surging between belief and doubt,
to risk broaching broadside to them,
turning turtle and sinking without a trace
while the sea rolled on unmoved
as it had since the cosmos blasted into being
or when God’s hand reached down
to stroke the firmament, soil and sea to life,
accountable only to Himself for its terrors—
leviathan and storm, tsunami and temblor.

The rough truth of the bark against my back,
the smells of sweet balsam, the honey-and-toast of cut hay,
and the certainty of harvest’s closing of the circle in its time,
anchors me in the purity of the farm’s language
as land seemed to him a safe harbor with its shallow soundings–
an insular Tahiti, proof against all the terrors of his half-known life.
But he knew that deep thought and the ocean’s deeps are wedded,
that just a spoonful of ocean tastes of God’s barbaric recklessness,
that his mind must launch itself from the shore
and that the calm sea hid greater terrors than storms,
its bland surface shrouding sharkish savagery, demanding lifeblood.
Better to be held in check by marriage, get and law.
Thus landlocked Nathaniel’s story of submission to the A,
of resistance and revolt deferred,
a comfort for him, diving deeper than he knew
himself, drilling deeper day by day forging a story
that took him and drove him before its gales,
spinning him in its warring currents,
but always engaging the leviathan:
God’s heartless boast to Job
for which only God can account,
making of those who dive deep
avatar and apotheosis of the madness that incinerates sanity;
like the cabin boy set adrift, alone,
who witnessed the mindless, cosmos-creating coral insects
that heaved the planets from the firmament of waters
and bred the beast that became all
that maddens, torments and cracks the soul
with questions of design or accident
and of the sanity or the madness
of a mind that longs for the one affirming act:
maybe the harpoon exploding from an orphaned heart
to strike God mortally, ecce homo,
to behold the man liberated by his pain
who could dominate all of deity there is with his rage
that flays away the skin of self-restraint,
rejecting all the maps and tools of navigation’s fantasy
to reveal us in all our naked perplexity;
who could collapse chaos into cosmos,
who would be democrat with the gods
and who suffers his crucifixion for all of us,
affirming our abandonment.

I sit here in this cool green shade,
bathed in odors of balsam and haying
in the sinking gold-leaf light,
leaning against a pine’s rough factuality,
ignoring chores and obligations
to reach the end of this book, holding down
the wind-driven, unruly pages of his monomania
that drove him day after day to his writing room,
driving me to follow him,
deep-diver beneath the placid surface
of this quiet day in the same Berkshires he knew,
Greylock rising green in the hazy August distance,
seeming as steady and immovable
as somebody else’s idea of God
and deceptive as the sham of the level line
we draw between wound and belief’s soothing balm,
all a futile clenched fist shaken
at the phantom of leviathanic powers
that may breathe and bleed only in belief’s dream;
at the same time afraid
that to lose myself in mystical meditation,
may send me plummeting into that endless maelstrom
of vortex upon vortex, deeper than I could sound
with the heaviest lead plummet.

There are the green, surrounding mountains,
their reflection in this mirroring pond,
and the scent of ripe rye, cut hay, still water,
mud, frogs and fish, bark and balsam.
How benign the Berkshires must have seemed
and how necessary to cleave to Nathaniel
and to dedicate this hell-fired book to him,
who had learned to sail on a steady heading,
no matter how turbulent the sea and gale,
his poise ballast in that raging storm.
He knew the cost of Nathaniel’s serenity,
like holy oil spread on the ocean, calming the tempest
that followed Jonah, thrown into the sea,
cast into hell’s belly to learn submission.
He saw Nathaniel and himself–
brothers in knowing the weight
of bearing blackness ten times black,
secretly crying No! in thunder,
knowing all those who say yes, lie;
and all those who say no live unencumbered
carrying no more baggage
than their reality-creating selves.

And, so,
I, only, am escaped to tell thee.
Here I sit, leaning against the irrefutable trunk of this pine
with this book that with every word
asks me how I came to be here,
farming for a season or two or three
to learn the farm’s factual, annular language
that strips away illusion and so affirms,
calms, consoles and contains the submerged life,
eases its light into the mind’s sight
to speak from clearer eyes
in the farm’s severer tongue,
brother to this book.