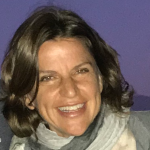 In a brick courtyard tucked behind a busy Roman street, eight students and their teacher stand in an awkward circle, eating turkey and lettuce on whole wheat bread and drinking tap water out of plastic cups. An end of the year class party means some will be in Germany by September, and others will end up in detention camps trying to cross the border to France. So far, I have only befriended only Doudou on Facebook, even though I want to know what will happen to all of them.

Doudou likes to sit at the back of the classroom in the church basement, a scarf wound around his neck. He is not my brightest student. I would say that he has made no progress in two years, his English just as broken now as it was when he started to linger after class and tell me things, his pronunciation slowed by Wolof vowels. In fact, it’s only after class ends that Doudou gets what he really came for––intimate conversation.

The other students file out of class and he makes his way towards me, to tell me about the Romanian man who sleeps on the bunkbed underneath him, rarely showers, and snores loudly. He tells me he is looking for a studio where he can work with silver and make jewelry, like he did back in Dakar. He doesn’t want to work in Milan with his brother because at the factory, people get injured. Some have died.

He tells me where he gets free lunch––at a church near Piazza Venezia where the priest is a friend. The homeless Italians sit on a separate bench from the mostly African migrants, eying the other group with contempt. Doudou asks me one day: Why do Italians, who were born here, and have all the advantages given to them by their government, need free food? He can also discern what the homeless are thinking: why are foreigners taking free food from our church?

He didn’t realize it would take so long to get settled in Europe, set himself up with an apartment and a job, so that a woman will marry him. To all the female teachers at the refugee center, he floats this question. Who will be my wife?

The other students have similar concerns, but Doudou has an easier time saying what’s on his mind. He’s the only one who greets me with a kiss on each cheek, while the other regulars – Moussa, Ibrahim, Henri, and Mebratu – don’t even attempt a handshake.

This is a love story, but it’s hard to say what kind of love.

Most of the students come into the city center from campos, government housing for migrants, two hours out of town, making their way without a bus ticket, or breakfast, or a shower. They show up every day, Monday through Friday, for the hour and half lesson, and after a short break, go to German class. They’re interested in current events, so I bring in clippings from the Guardian, about the new central fish market in Dakar, or the ban on plastic bags in Rwanda, carefully avoiding topics that might make my students upset, like the far-right minister Salvini, whose anti-migrant decrees have already interfered with their legal rights.

I avoid Trump because almost universally, my students adore him. Whenever his name comes up, they praise him for being rich and powerful with that beautiful wife, and don’t care about white supremacy and immigration bans. Of course, they shrug. White people are like that.

Some of the arguments I’ve lost in class that I should have won:
Vultures deserve to be protected before they go extinct. No, they steal babies.
Elves are not real and also not messengers of Satan. Yes they are. Everyone knows that.
In a secular society, you should be able to discuss religion with a measure of rationality, without becoming incensed at the mention of Abraham and Isaiah. Don’t talk about the prophets. Ever. Wives should be selected for their charm and intelligence. No, she should be poor and jealous. A poor woman is resourceful, and jealousy is the way you know she loves you.

Doudou is the chewy center, the one we count on to make peace when things get heated. In any constellation of students, he is the one we look to when we need a referee.

One day, an older woman from Ecuador joined the class. I couldn’t tell if she was following, so I asked if she would prefer to take the beginner’s class. Doudou looked up. “This is the right place for her,” he assured me.

He is my son, too, even if Doudou is not his real name. He has to go by another name on Facebook because, after ten years in Europe, he has given up trying to explain to his family why he’s not sending money home.

The students thank me at the end of class, with genuine gratitude, to talk and have a distraction from days, months, or years of waiting for the slow Italian courts to process their claims. In the classroom, I am not the mother of teenagers who think everything I say is lame or the wife of a man who has already heard all my stories. Instead, I have the captive attention of a room full of young men.

Other teachers have been carried away by the intensity of emotions at the center. So much need. So much to give.

In class, we are constantly getting off-topic, but without the formality of a lesson, I can’t think of what to chat about at the end of the year lunch, where typical party topics are at best inappropriate and at worst traumatic: family, relationships, future plans, childhood stories.

I’m tempted to rely on Doudou too much for party conversation. Out of a sense of fairness, I turn to Moussa, the youngest of the group, who sleeps periodically during class, waking up to ask a question about something that we discussed five minutes earlier. Next I turn to Ibrahim, always in a button-down, ironed shirt, no matter how hot it is. Stand one inch too close and he will float a marriage proposal, even though he already has several teenage children back in Somalia with various mothers. Ibrahim likes nothing more than to ask complex questions and pursue them doggedly. “Why are men paid more than women?” He asked me one day, and when I gave him a flippant answer, he wouldn’t let me off the hook. “You’re an educated person, I want to hear the whole reason.”

Or the time he asked Doudou, “Why do you like poor people so much?” Because Doudou is a progressive at heart, even though he shakes his head when he hears more migrants are coming. “They should stay at home,” he tells me.

At first, I object to his views, but later, I do the math. There are only so many beds in the campos, so many permesso di soggiornos, so many dishwasher jobs. The more people come, the worse his own prospects.

In Senegal, trust is currency. To survive fuel shortages, you need a friend at the petrol station to hook you up. When your job doesn’t pay, you need credit from the Lebanese grocer. At Eid, you might have to pay the tailor later for your new outfit. Doudou is the master of this, bending an uncaring city like Rome into a shape he can recognize, a place he can call home.

One day, when I thought Doudou wasn’t coming, my energy for the class took a nosedive. I stopped talking and opened the classroom door to look around the center. Was he coming? What was the point without him? I refocused on the other sweet, young faces. Don’t be ridiculous, I told myself. You don’t come here just for him.

Doudou has been living in Rome for a decade without legal papers or steady income. He was doing fine before I met him, with his network of people who love him, and he will carry on whether I’m there or not. Aside from buying him lunch twice and one scarf, I haven’t done anything substantial for him.

At the outdoor market around the corner from the church, I paw through the scarves, wondering what to call this kind of love. It doesn’t matter that I have never seen Doudou without a scarf, or that he asked for something he already has. Nor do I stop because I am breaking the refugee center rules, or because teachers aren’t supposed to have favorites.

I reject the knits that will pill or unravel, looking for something softer and thicker. “Any cashmere?” I ask the Bangladeshi vendor. He shakes his head no. It’s not that kind of stall. I pull a plaid one from a plastic wrap, with a Burberry vibe to it. If I cannot give him what he really needs, then at least I can do this small thing. A flash of plaid to set off his layered outfits as he makes his way through the streets of Rome.