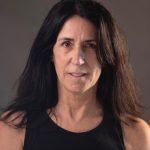 . . . . like scaffolding
coiled in the greenest ivy
as the process of rewilding begins.

Gill O’Neil’s third poetry collection, Rewilding, examines the process of breaking, palps the shattered pieces, and finally rebuilds an organic structure, one stronger and luminous. As I read Rewilding, I recalled the Japanese art form of mending shattered bowls with golden lacquer. “Kintsugi” loosely translates to “golden journey.” Something new is created by these precious seams; something stronger because of its shattered nature. Gill O’Neil’s poems describe this breaking of buildings, of a marriage, of language, and finally, of the skin, that tactile organ, “the outline of a body on a body,” with all its sensual and racial implications. Despite the implicit grief, there is an acceptance and joy in the “rewilding,” in piecing together a new form, a new life, which demands Gill O’Neil’s poetic skill “to reimagine destruction.”

Gill O’Neil conjoins structural destruction with the breakdown of a marriage. Her long, sectioned poem, “Brave” opens with

Something human and something man-made rains down on the speaker driving through New York with her soon-to-be-husband. The sections move from the inferno of September 11 (the debris, we infer, is from the Towers falling), the speaker’s divorce proceedings at the courthouse, and the life of a single mother, with an animal—a raccoon mother perhaps with babies—trapped somewhere in the home.  This home, like the Twin Towers, changes its shape, becomes organic, a breathing breeding ground.

play loud music to scare it away,
pray it does not have kits.
Marriages fail.

In “Family Photo,” Gill O’Neil identifies a rot inherent within the structure, dooming it to an inevitable collapse. The husband is

sporting a soul patch
because you knew I liked its scratch
against my skin. But I think even then
it was the root of something hidden,
a swirl of rot from the inside out.

Language, too, breaks down, decomposes. In “Tell,” the speaker and husband venture down to the basement, where “the whole room is a sham” covered in bleached-out “mold spots.” The husband, named “King of the Basement,” is leaving for an “authentic life.” The speaker’s “tell” is the repetition of this term, “Tell me again what it means to live an authentic life.” This malleability can also free language from its artificial constraints. In “Hope You Get a Promotion Today,” the newly-single mother changes the concept of failure, asking her children

. . . . What did you fail at today?
and when they come back with nothing to say
you look disappointed, for how else can you show them
how to try/risk/fail/endure . . . .

The poem, “Mad Lib for Ella,” completely pulls language apart using the Mad-Libs form, “If she could fit (noun) pee and (noun) poop in the conversation, / she would.” The mother and daughter share this “language” game during a storm, “we bundle ourselves under (adjective) whispering sheets.”

In so many of the poems, language begets intimacy and becomes glue that mends that broken parts. Gill O’Neil writes, “language is hope.” The poems that recall other poetic voices—those of Clifton, Millay, Brooks—also engage sensually with that most intimate boundary: skin. In her homage to Lucille Clifton, “Thinking of Lucille Clifton’s ‘If I Stand in My Window’ at the Convent,” Gill O’Neil states

Who wouldn’t want to lower her nightgown
or raise her blouse and push her breasts,
nipples tight as raisins, against the frosted window//

Skin can also be a dangerous boundary and its breaking fatal. The wall of racism that warps the spine of our nation is ever-present. Fearing this world in which her bi-racial son, who friends describe as “not really black,” Gill O’Neil recalls Trayvon Martin in her poem, “Hoodie,”

his name to the night, ask for safe passage
from his borrowed body into the next

and wonder who could mistake him
for anything but good.

Gill O’Neil’s own sadness about this dermal boundary is more than skin-deep and challenges the reader. In her brilliant “On Being Told I Look Like FLOTUS, New Year’s Eve Party, 2014,” she writes

Deep in my biceps I know it’s a compliment, just as
I know this is an all-black-people-look-alike moment.//

You’re working your muscles to the point of failure,
Michelle Obama once said about her workout regimen,
but she knows we wear our history in our own darkness . . . .

Skin as an organic wall also signals another rewilding, a rebirth of sexuality. In “The Night I Wore the Purple Dress,” Gill O’Neil fuses the dress with geographical boundaries,

This dress with the zipper
like the Mississippi flowing
the entire length of the United States
meandered toward the Gulf of Mexico
down in the Delta.

In this poem, like “First Sex After Divorce,” the speaker becomes deified, breaking out of her human-sized skin, into a goddess, a titan,

Freeing the peel from the skin
and the dissolve into pulp.

January Gill O’Neil traces the painful, yet necessary, breaking down of mores and boundaries that want to force a voice—a female voice—into something right-sized. In Rewilding, the reader is lead through heart-break and heart-grace. “My arms are a bouquet of broken stems,” Gill O’Neil writes, transforming the poetic line with alchemical juxtaposition, pieced together with gold. Rewilding is a physical book, the pain acute, the joy, piercing. Finding that light deep inside the broken-ness and the hurt is like walking on the shells covering Dead Horse Beach, feeling

. . . . ache under my feet,
the deep ridges of shells
worn down by salt and time
while their insides are luminescence.