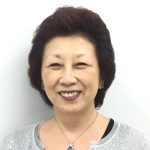 When the waters have finally receded,
night
falls.
None of them are used to such darkness
(……………Obsidian……………)
so black they cannot see their hands before their
tear-stained faces.
None of them have ever been without
human light, without
electrons, miraculously harnessed, without
the power of the universe to obliterate
ancient shadows.
(……………The extraordinary dedication of our engineers have achieved……………)

She has never before felt the weight of such blackness
such massive silence. No sound can reach her.
Though in her ears an incessant ringing
as of a thousand tiny fairy-bells
shimmering over a field of darkly swaying grasses she cannot see.
(……………Psychological stress may sometimes induce tinnitus……………)

She can barely hear over the clamor within and without. The moon
rises anyway.
Graceful, nonchalant, coolly incandescent.
Hanging low over the horizon
casting a thin trail of white over the glimmering black sea, far below.
She has been shivering for
hours. They have all been shivering for
hours.
How many of them here on this frigid slope, the curving climbing road
lined with cars, trucks, vans. The old, the injured, the very young, pressed together inside.
Nowhere to
go. Too fearful to
go. Where would they
go.
(……………Scientists are divided on the question of what effect, if any, melting ice sheets might have on the movement of tectonic plates……………)

She shifts on the hard frozen asphalt
lifts arms away from her cold stiff body as if she had
wings
could unfurl them and
rise
hover over that silvery path on the sea,
fly towards the enormous moon, fall into it, fall
into the icy luminescence,
into the water the water the water.
Around her, crying jags come and go, ebb
and flow, like the tides
like the waves, so far below.
A man in a suit stands up, howls like a wounded wolf, shouts and curses
then weeps like a little boy
under the silent moon.
(……………Experts caution that rising sea levels may result in a myriad of unexpected and deleterious effects……………)

“Look,” someone whispers. Heavy limbs
move, just a little. Heavy heads
lift, just a fraction.
The last flashlight flickered out long ago. Phones have died,
their comforting aquarium light no more. She does not care.
She has heard enough
news.
She cannot bear to hear any more
news.
“Oh, but look,” says someone else. Wonder in his voice
not pain, not anguish, not hoarse despair.
Rustling movement around her as some look up. They all look up.
Even she looks up.
‘What is it,” asks a child, quickly hushed.
Not her child. Not her child. Not her child.
(………Light pollution is a serious concern………effect on migratory birds………students no longer express an interest in astronomy………)

The River of Heaven. She has never seen it before. None of them have ever seen it
before. Billions upon billions of stars,
a glorious torrent of light flowing thick and wide across the great black bowl of sky.
So many stars.
She hears them singing. A chorus, a symphony. Singing singing singing.
Tears in her eyes.
The stars swirl, the River of Heaven ripples and moves
massively
tiny stars fall away like spray, like rain.
The huge night sky is alive
with movement,
with coruscating light
the radiant souls of all that were swept away.
Each spirit a star. It must be so.
Her child her child her child.
It must be so.

(………following the massive quake, many thousand are believed to have perished as a result of tsunamis. Towering waves also caused the shutdown of a nuclear power plant, thereby plunging the entire northeastern coast into a blackness not seen in modern times.

In the days that followed, survivors spoke hesitantly of the brilliant intensity of the stars that night. Remarkably, in interview after interview, similar words were repeated: “We should not, should not have thought it beautiful. And yet………)