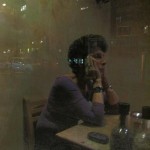 I went to lunch with a man I was getting to know who suffered from depression but was disciplined and productive. His name was Peter. He was red-headed and fit, but he had a look I thought sad. He told me about a woman he had recently broken off with. She wasn’t smart enough, he said, turning up his palms. I don’t remember how the subject arose. Maybe I asked if he was seeing someone. It was the kind of question I would pose to someone I was becoming friends with, although Peter might have brought her up. He said she was beautiful and quite a few years younger than him. She wasn’t interested in him sexually, although she was disappointed when he called it quits. I was curious to know if he would have continued seeing her if she had wanted sex, smart enough or not, but I didn’t ask because the answer seemed obvious, and at some point or other I had been both in his position and hers. I thought Peter was taking me into his confidence, but the disclosures made him appear dejected and a little mean. Other things he said formed the opposite impression. He had started from humble origins to become a celebrated poet. He’d strengthened his body after a debilitating illness. I was impressed but felt I would need to watch out if I crossed him.

Maybe I decided to do that, and as I consider the possibility I’m reminded of an incident from childhood. I’m three or four, in the front courtyard of our building in Washington Heights, where I’m allowed to play with other kids, and maybe my sister is there, watching me. I spot a razor blade on a ledge. The building is made of white brick and the ledges are cement, and the razor is sitting there, as if a devil has positioned it just so. It’s rusty and I know it cuts, but I’m not sure which edge is sharp, so I pick it up and slide it along the pad of my index finger, and the skin parts like a curtain and I look inside as blood pools and spills. I’m not exactly afraid because I have done it to myself, or maybe I am afraid but don’t feel entitled to the emotion fully so don’t feel it, and it’s a revelation there is a valve inside you can switch on and off. It’s the start of a series of experiments I know ahead may end in suffering. How else to explain the repetition? People will try anything once, but what if you are willing to try anything twice or more times? Maybe these temptations make us look bolder or more beautiful to ourselves. When my mother took my bleeding mitt in her scolding hand and cried out, as if I had cut her, the pain switched on.

My lunch with Peter was nearly over when he told me about a dinner he’d arranged for four West Coast friends and an East Coast visitor. He called it a guys’ night, and he said the men had gathered at his apartment. He was illustrating how he emerged from solitude to sociability, but the anecdote beckoned to me like a razor blade, and I asked what comprised a guys’ night. He shook his head and said he had never given it thought. I asked if when men were together they spoke in a particular tone or about certain subjects. When men separated from women, they often framed it as escape, and who wants to be escaped from? Peter hadn’t said anything of the sort, and his head moved back, and he said, you are so self-reflective, which I thought meant shut up. He said it would never cross his mind to ask why I’d spent an evening just with women. I said I could explain. He said go ahead. I said, suppose you told a black person you felt like spending an evening just with white people. He flushed a dark red and objected strongly. I said, I know you would never say that. You would understand why a black person would be interested in a selection process based on color. I’m interested in selections based on sex. He relaxed a little, and I knew I would never see him again, and I felt responsible for causing trouble and do now as I recall the conversation, and I don’t know what to make of this courting of difficulty except to suppose it must for moments cast me in a flattering light to myself and eclipse the jealousy I felt about his success.

At the time of the lunch, I was working as a cater waiter, serving at parties in a tuxedo and bow tie. Whenever the phone rang, I would say yes. The day after the lunch with Peter was Thanksgiving, and I joined two other servers and two chefs to present hors d’oeuvres and dinner to eleven adults and five children in a long, wide apartment on Sutton Place. Yellow leaves on the trees looked lit from within as I made my way there. Beyond them the East River rolled gently along. Two actor friends, Paul and Jessica, were among our group, also Tina, the chef, and Ernst, her assistant, who, when he was not cooking, sailed as a merchant marine for the European Union.

I liked these people in a soft, distanced way. It was like a blanket, the sense of belonging to a group because you worked with them. It was one of the reasons I said yes to jobs. The chefs had been at the apartment for several hours when the rest of us arrived at 3:30 and were directed to the service elevator by one of four doormen. The space was piled with garbage bags and looked as if it had not been swept in many years. A pretty, Spanish-speaking young woman got on with us and wished us a happy Thanksgiving. She was carrying a load of shopping bags, and we wished the same to her and to the elevator operator, who spoke with an Irish brogue. I meant what I said, for I was glad for a place to be, and I was struck by how solitude, which I often crave, can, out of nowhere, cut you.

We were supposed to have two hours to organize things, but guests arrived early. I set the table, while Jessica went out for more ice and Tina and Ernst finished cooking. Paul served drinks. The guests were neither friendly nor unfriendly, rude nor gracious. We didn’t look at each other. We were like two separate families finding themselves at the same dinner.

The menu included turkey, gravy, stuffing, two kinds of cranberry relish, mashed potatoes, haricots verts, baked lady apples, sweet potato compote with marshmallows, and miniature buttermilk and chive biscuits cut in the shape of hearts. There were five kinds of passed hors d’oeuvres, including shrimp dumplings with a spicy plum dipping sauce. For dessert there were individual tarts tatins and pumpkin pie with whipped cream, plus chocolate dipped strawberries, petits fours, and cookies. I mention the food because it radiated a sense of plenty I tucked myself into.

Each guest requested a different arrangement of items, and if it was not as specified—say, three slices of white meat with gravy on the side and extra mashed potatoes but no stuffing—the plate had to be redone, even though platters of seconds were butlered around as soon as the dishes were set down. I wondered why the guests needed to assert themselves in this fashion, and I thought maybe because they had spent so much money on the meal and fussing made them feel consequential, and I was reminded how phantom-like the feeling of solidity is and how no one can ever quite possess it.

All in all it was an easy job, and the catering team worked as one. Between courses, I washed and dried plates, silverware, and glasses. As we performed our tasks, we nibbled rather than sitting down, and people chatted about their lives. Paul had been in Austin for several months, acting in a play he’d liked. Jessica’s ex-girlfriend was still calling her all the time. After serving dessert, we cleaned the place until it looked like we had never been there, and when there was nothing more to do, pain switched on.

The next day I went to a yoga class taught by a woman named Vanessa. She had been in Croatia for two months and was returning to a class of five. She looked scared when she saw how few we were. During her absence, Eric, a charismatic teacher, had come back to the club. The class Vanessa was teaching had once belonged to him, and while she’d been away he’d joked about “kicking her to the curb.” One of the things people liked about Eric was his cruelty. It made them push themselves, his combination of toughness and attentiveness.

I had not taken many classes with Vanessa because the kind of yoga she taught was repetitious. I would begin a series of poses and soon irritation would rise up like acid over the lip of a beaker. My friend Adam liked the repetition. It reminded him of practicing the piano as a boy. He had become excellent at both endeavors, and, stretched out beside him on my mat, I felt I would always be sabotaged by rebellion.

Vanessa had the body of a lobster that could bend and twist in and out of itself, and I focused on enjoying this. Today, she decided to mix things up, which I appreciated, although even if I’d been bored I wouldn’t have left. I was rusty and lazy. Had Eric been teaching, he would have hounded me to do a better job, and had I been Adam accomplishment would have added to my happiness. I didn’t need accomplishment for happiness, I was discovering. I just needed accomplishment. It created a feeling of well-being inside or off on the margins. To be happy I needed to perform other deeds, even though the same people I performed them with would drive me howling into the wilderness if I spent too much time with them.

After class, I reminded Vanessa it was Thanksgiving weekend and people were away. She nodded, saying her life wasn’t working out in New York. Her time in Europe had shown her that. She said she didn’t know how to fix things. She was working on a master’s degree in English literature and wasn’t sure what she would do when she finished. The thing she liked most was talking to people about literature. Maybe she should work in a book store, she mused. I said my life wasn’t working out that well, either. She said, really? I said yes, and as I said it I knew it was true and that it did not hurt so much to admit it because it was a pain, I suppose, I had organized. Anyway, just at that moment I wasn’t in pain because I wasn’t alone and neither was Vanessa.