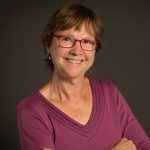 We’d driven north for five hours straying off the highway to admire the countryside along billboard-free roads. I’d point to white houses with green trim, that one, like that, imagining a future when we’d own a house instead of renting. Thom’s new broadcaster’s license was in his pocket. One suitcase, orange crates of LP records and Thom’s stereo equipment filled the back of the very-used VW station wagon my parents had gifted to me after our wedding a few months before. I’d been grateful, even though the sunroof leaked.

Thom’s disc jockey job was starting in two days. The studio apartment we’d rented sight unseen would be available tomorrow. Thom had said he’d ask around the station for a place to crash; his new colleague Ben had offered.

When we arrived at Ben’s, Thom and I sat on a sagging couch listing into each other. We chatted about our drive, me holding up the conversation like bait hoping for something to drink, while Ben swigged his Rolling Rock. It was seven-thirty at night, the sun lingering after a long summer’s day. Ben slapped his stocky thighs and stood up.

“Okay, I’ll show you where to sleep.”

We followed him into a hallway where he swung open a door and stepped back, gesturing. He walked away.

We peered into a closet, dank air swallowing us.

Okay, not quite a closet since a small aluminum-framed window punctured one wall up near the ceiling. A single mattress claimed the floor space.

“Here you go.”  We jumped at the sound of his voice behind us. He handed Thom a wad of sheets and one pillow.

The door clunked shut. Thom and I looked at each other. The string for a ceiling light dangled overhead and I yanked it flooding us with harsh light.

“Can you open the window?”

Thom clambered onto the mattress and slid one side of the window open. No screen. The room was an oven.

“Leave it open. I’ll turn the light off.”

I tried to hide my dismay. Why did he offer his place to guests? He didn’t want us to be here. Jeez Jill, be happy we’re saving money. I didn’t think my expectations were that high. Some guys are just clueless. I’d grown up with parents who were hospitable. Traveling as much as we did for my father’s job, we often stayed in people’s homes and reciprocated by hosting others. Sometimes it was fun, or at least civilized.

Dust bunnies piled in the corners. I figured Ben must be in between girlfriends or lived alone.  It was 1972 but the world was still a place where women cleaned and men didn’t.

Thom didn’t say anything. I had no idea what he was thinking. I felt a little sorry for him, glad I hadn’t gotten us into this mess. Rummaging in the suitcase, I grabbed my toothbrush and crept down the dim hallway looking for a bathroom. I could hear the muffled sound of a TV. The canned laughter.

Scooping water into my mouth, I cringed at the toothpaste-spattered sink, the gunked-up razor, hairs by the faucet. I dried my hands on my jeans.

He rolled over and fell asleep. I looked at his thin pale shoulders, his hair–brown like mine–sticking to his neck. I wanted to read but didn’t dare turn on the light. The whine of a mosquito, then a chorus. I yanked the sheet over my face. A detergent smell made me feel a little better.

I’d grown up overseas and had been stuck before in unpleasant living conditions. When I was ten, after my dad’s two-year assignment, my family had driven from Jordan all the way to England. We’d stayed someplace in Turkey or Greece where the room was so infested with flies that my mom, who seldom cried, wept. I’d learned not to expect a clean toilet, or any toilet at all, or familiar food or much comfort. It was temporary, a stop on the way to someplace we’d call home. And here I was again, just turned twenty.

This day was the first stop of our independent lives. Thom and I had met at college, dropped out after two semesters. My father was fine with saving the tuition especially after my mother had opened and read my letter addressed to my younger brother. I’d expounded on the pleasures of LSD, while bemoaning the mediocre weed compared to Nigeria’s. Dad stopped all allowance. I stopped the charade of college.

We spent the next year living with Thom’s parents in Suffern, New York. He’d commuted to school in the city to earn a disc jockey license, and I’d waitressed at a Greek diner in nearby Spring Valley. Thom blanketed radio stations in New England with his resume and landed an interview that led to this first job, airtime on the graveyard shift.

Lying there, back glued to the mattress, my mind looped on a one-track tape. I railed at Thom: how did we end up here? My eyes closed and sprang open blinking sweat, maybe tears. I could smell my anxiety. I could smell Thom.

I railed at Ben. How could he be so rude? And me–I could’ve spoken up–and what, left? Thom had to work with Ben, this colleague in his first job. I couldn’t shake the feeling that my new husband had failed a test.

I talked myself back from the edge. Come on Jill, it’s unlucky, sure, the guy’s an asshole, Thom did his best. You’ll survive.  My optimism would surface until I slapped a mosquito. At least they don’t carry malaria like in Nigeria. I’d never expected to be caught like this, feeling helpless like a kid. God, I hated mosquitos.

When I’d left college, my parents were still living in Nigeria. They were due home later that summer. I’d needed an exit plan. I wasn’t going to live with them, wherever that might be. Thom and I would figure out the future, together.

When he surprised me by asking me to marry him, I’d hesitated, then, sure, why not? I didn’t see the point, but I went along. Now I wondered if I’d been scared of being alone. I’d lived all over the world and I’d never been timid. Hanging back in doubt, or ignorance, had not been my thing. Now that I was back in the States, was I turning into someone else? Someone who couldn’t stand on their own?

Panic started rising. No, I was adjusting, being part of a grown-up couple. We would each have our strengths. And Thom was the one on track with a career.

I didn’t know what I wanted to do with my life. How could I? I’d just started living it. I’d expected to finish college. I had a vague idea of Doing Good; working in a prison as a counselor or joining the Peace Corps. Colleges were spitting out young zealots with action plans to change the world, an inspiration I wasn’t feeling.

Thom was passionate about music ranging from obscure rock bands to Beethoven. We both liked to read. He turned me on to new universes created by Heinlein and Asimov to Frank Herbert’s Dune. He taught me cribbage. He had patience. What other stuff might I learn from him? He shored up my American cultural deficit after living away from the States for ten years. Yeah, I’d absorbed plenty of foreign culture. I had stories. None were easy to share without sounding like I was from another planet.

Was Thom a placeholder? I pushed the thought away. Besides, he was crazy about me.

I twisted my wedding band around on my finger. I couldn’t see a thing except for a faint light out the piece-of-shit window. Maybe I’d needed this night to think about careless decisions. Morning would bring daylight. We’d be out of this dump, and I’d see who I could be. I’d see who Thom turned out to be.

I nailed another mosquito. I watched a tree top spear a sliver of moon. Footsteps down the hall and a door clicked.

The peepers were going wild outside.