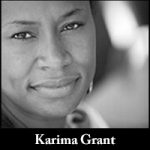 Rabia would not have chosen this house with its reek of store-bought happiness. Shining tiles and light fixtures made-in-China-ready-to-break. Windows underdressed with pretend curtains. Like the girl: her whole life on show.

Rabia inspects the room she had been seated in for the naming ceremony.  Too much sun.  Heated rooms meant faded furniture, inflamed passions and tempers. Rabia presses her lips into a tight line. An air conditioner would be needed for every room of such an oversized house.  She supposed they had the money. Or rather her nephew had the money.  Or, as the girl insisted whenever Rabia hinted at her own diminishing circumstance, the company had the money. Her nephew and his wife, to hear her tell it, were absolute slaves to the company’s whims and desires.

Silly girl, thinking it could be so easy. Returning home to Dakar, and having a company take care of every little want and need. As if there were no tradition still, no family left who might know better, who might offer caution and wisdom and discretion in all matters. Advise against such good fortune so gaudily on display.

If the girl had been her daughter-in-law, this naming ceremony would have been amid the bougainvillea covered walls and the hibiscus bushes of Rabia’s garden. And the nephew returned from America, might have been a son. One of many sons Rabia might have borne for some nameless invisible husband from an upstanding family like hers.

Her neck stiffens. She straightens, a habit whenever the feeling of regret attacks.

Modesty. Virtue. Decorum. What had saved her all these years from the disgrace of a bad marriage.

Already near ten in a hot morning, so late for a naming ceremony! If the girl was her daughter-in-law, Rabia would have more than one thing to say about making guests wait like this!

If you want to know what patience is, take a wife.  Know what indulgence is, have a child.

Rabia stands. Discreetly tugging the dyed wrap skirt into place. At her age, it would not do to be seen unkempt. She glances around the room. No one was watching. There has been no one watching for some time now.

Little Ms. Time-is-Money late for her own naming ceremony when she had been so pressed to move from Rabia’s house!  Blaming the company. Parroting their threat to terminate the housing allowance if she and the nephew didn’t move into their own place ‘as soon as possible.’  As if upon their arrival from the airport, Rabia hadn’t read the dismay written across their faces at the state of the family home. The nephew could be forgiven (men were like that, Rabia knew), but the girl… The girl had been betrayal from the start.

Cringing at the thick sheets of dust on the stiffened curtains and worn rugs.  Offended by the ripped insect screens, chipped and missing tiles and uneven floorboards. Pinching her nose at the smell of mould.  ‘Stay here?’ she had said, raising her eyes at the nephew in alarm.

As if Rabia would never fix the broken and falling apart, throw away the no-good, gone-to-rot. As if a patched and mended life was not what the girl had ever had in mind. Choosing instead this brand new house, the new life study-in-America had bought her, turning her back on the old before of a never married aunt-in-law.

Haste and hurry can only bear children of regret.

Blood called blood, Rabia had prattled on the weeks before their arrival to anyone who had listened. How happy she had been to know her own blood was returning to her, so fresh, so young, so successful in a stale, defeated world. Of course, they would provide for her, include her in their common future. Of course, they would restore the old house and deliver Rabia finally to a happily ever after.

But they had moved.

Whether you wait for tomorrow or not, tomorrow comes.  And so Rabia had continued on, juggling her debts: first the fish-lady, then the vegetable seller.  (She had long ago given up meat.) The taxi-man, who took her back and forth to work and had known her longest, could be counted on to not shame her, unlike the other two with their seething jealousies of Rabia and her good name and upbringing. Rabia returned to market haggling like she had once watched the maids do, willing herself to forget the years when sellers offered their very best wares at the once elegant now termite-eaten servant’s door.  She straightens herself.  Extra francs saved had paid for this new outfit.  Made especially for the baptism of her first almost grandchild.

The staircase to the second floor was winding, its banister a wood she didn’t recognize from a country she had been warned against visiting.

‘A country of heathens and infidels, most likely…’ she comforts herself. The halls are bright with color. Her own graying walls recalled the modesty her mother had always preached.

Ahh, but Rabia had been made trustworthy. Modest, obedient, faithful, all the old world reasons for being a girl.  Tradition. Yes, she was the bearer of tradition. And she had been good and decent to uphold tradition, honoring the family name by never marrying beneath her. Even if that meant there were no more suitors, no more from decent families because it had all changed.

Time was not soap, but still it paled.

Yes, it had all changed and where had she been?  Homes like these for young couples? Too many rooms!  Rabia knocks upon door after door, finding the girl in the biggest, sitting on a bed as large as an island. Rabia straightened what was left of her full height  (the years too had stolen inches from her stature), prepared to remind the girl of the waiting guests.  Of courtesy and politeness.

Lu la yar ak teggin meyul, leneen du la loo mey. What courtesy and politeness cannot get you, nothing will.

The words ready on her tongue.  The chastising every young girl needed to be brought into line:

‘Seated elders see what a standing child missed. The men have all arrived. They do not like to be kept waiting.’

The baby is in the girl’s arms. The girl turns her head toward Rabia, a slow smile spreading.

‘We have a surprise, you know. For you.’ The girl giggled.

Such silliness. Hardly a wife.

‘We’re supposed to wait to tell you, I know. He wanted to wait. But I just can’t.’

The girl stood, the baby in her arms, wrapped not sufficiently well, Rabia could see.

‘I wanted to be the one who tells you.  As a thank you for all you have done for us.’

The girl was bound to be an imperfect mother, handicapping that poor, defenseless baby from the start.  Oh, if Rabia had only been given a chance…

‘We have chosen to name the baby after you.’

Rabia stops.  Hesitates before the baby in the outstretched arms of the girl.

A namesake. Testimony to a life lived.

The girl pushing the baby onto Rabia.

‘They say a namesake takes seven qualities from you,’ the girl continues, but Rabia is not listening.

Decorum. Adjust her head wrap. Make sure it was straight, not falling. Touch it, steady it, hold anything but the baby.

The girl moves toward her, the baby in her hands, an offering to Rabia.

A namesake. Another girl in the world to carry on her legacy.

Rabia trembles, arms reaching out to take the baby.

The baby, quiet in her wrapped peace, is already warm and heavy in a precocious satisfaction with the world.

Lies that build are better than truths that destroy.

She hands the baby back to the girl.

‘Your guests are waiting.’ She straightens, every inch the full height her life had allowed. She turns, walking back down the stairs, across the tiled floor and back to her seat in the living room.

No. She could not wish this life on another.