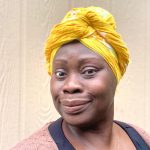 Tonight, I realize I am more invisible than I thought
It may have been my fault, just like my people’s
Maybe my kindness settled steadily like a pond
Awaiting pebbles for ripples instead of bloodshed
Or maybe I held in my wild upsurging cries
Unlike the rocky beaches of Liberia’s shore
Where saltwater banged its head on gray rocks
During her civil war of bloated bodies and naked skulls
I concealed tamed enough to remain unheard
I was invisible then too, and there’s no dispute
I muted myself, so kid soldiers wouldn’t rape me
My lips locked tighter than ropes tied around elbows
Like the condemned shoved into shadow graves
Now, I’m silent, so others can discover acceptance
Buried my truths so no one can feel overshadowed
I who, before, shouted my many hues of living greens
Danced across coconut plantations and rubber trees forest
Celebrated on oceans with Kente and Lace headdresses
Gave birth to heavenly stars for the world to wordship
But now it’s too late; I am an invisible woman
Just another diluted speck on a golden map
I’ve limited my parity like many dreamers before me,
Unpledged my people and lands for a “Dream Deferred”
I’ve welcomed heated words hotter than the equator
So the God-made man can rule as “The Man”
The smaller I converted, the more I befell invisible
Not even the wind whispers tribal lullabies
Like it once chanted on Liberia’s virgin shores
Long before they returned their freed slaves
No flirty breeze guides me to a promised land
Only the freeze of those distant days lingers
Like undocumented deaths in our history books
Now, I’m completely unseen and unnurtured
As a leeching immigrant without contributions
But a shoulder of burdens to recede away
Where no more love pours into me
No one cares, so what if I’m missing or gone
Just some unnamed African who they may report
No one sees invisible anyway
The world will blade through its bliss
While another unblessed grave sinks below their feet
As if I never came to matter enough in the first place
As if Liberia was never born in America’s bosom
Like every other shore rampaged over crimson greed
I have grown to be the invisible woman
No land remembers, and no shore wants me
And they made sure I ain’t worth any fuss