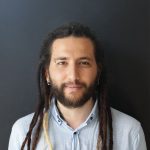 After today, they may say that I lived as I died: twice.

Some superficial people might think just because I died once should mean I couldn’t live twice. Or just because I lived twice should mean I was born twice. None could be further from the truth. Let’s be square and say I was born (once) out of my mother’s wetlands by the steady fingers of a midwife, was killed (once) in the wet sands of Florida by the fast hands of two friends, and was resuscitated (once) by the wet lips of a lifeguard who’d spurted those wet sands out of my lungs.

So I picked the most barren, unmanned place I knew on earth to die a second time, drily and lonely, on the roof of an abandoned soap factory in the middle of Iowa.

Yet midway through my first attempt at creative suiciding, it starts pouring as though the West didn’t want another desert, and to my luck, a girl half my age and twice my size turns out to be squatting the place for the last couple of weeks or so.

“You need to stop crying,” she says, mistaking the slits of rain around my eyelids for tears. She switches on the safety of the gun she’s pointing at me. “Makes you look fat.”

The first time I died was three years ago when my friends Mia and Theo buried me at the beach for fun. We were just done with three rounds of perimeter swimming and up for a leisurely time. I lay down like a beached whale carcass, and they covered me with sand until my body resembled a grave. Well, let’s be frank and admit there’s no way I could know about that, much less about the rest. The details in between are all fuzzy now, like watching a color film on a dim TV. After the lifeguard revived me, though, I remember that my lips looked so ingloriously blue and dehydrated in the mirror that they encouraged me to use aloe vera moisturizers for a few weeks, twice a day. However much I tried, the white-headed blisters freckled my mouth for the next couple of months or so, like some dead astronauts floating in outer space.

Which kept me thinking: in what shape my face would have been like had my stay on the other side lasted for another two minutes?

“People still mugging people,” I say to the mugger girl to postpone the latest episode of migraine growing behind my eyes like a bad thought. I lean over to picture the random shapes my body might take once I hit the cobblestoned walkway. “How weird.”

For how it all sounds, some people will take me for a defeatist. Or assume that I lack the required willpower. If nothing else, that I might have completely lost it, considering the scene and conditions of my current affair. Once again, none could be more untrue. Believe it or not, I am the incurable optimist. The pragmatic dreamer. Mind you, for three years now, I’ve been practicing not to die. Okay, let’s be fair and say: trying hard to survive. Sometimes with others. By helping those who wish to die by telling them how nothing happens on the other side. How it’s like covering a void with another one. A vain kinship with the perfect nothingness of life.

Until earlier this morning.

Until I’ve figured out that happiness had been a privilege before my overly sensitive soul found new ways to complicate things. Until the front camera of my smartphone took an accidental selfie at the only spot in my apartment with decent social media light. Though the sunblock was just right for my complexion, what I saw on the screen didn’t live up to my expectations. Whatever you name it—a malevolent force, a suborbital stench of mediocrity, some microscopic rot settled in my foundation three years ago and has then become a mountain.

My face looked just like when I’d died. Brick-red blotches populated my discriminatively white cheeks, advancing to my twin chin and triplet neck cascading like the topographic charts of Iowa. Eyes shut to a line. Eyebrows swallowed to a backlight. The face of a thirty-year-old, heralding a new decade.

“Tell me,” the mugger girl says, cracking a walnut with her horseradish teeth. “How much you got on you?”

“Just a few hundred,” I say, “but my lawyer says I have to spare some for Mom.”

“How much does she need?”

“That’s all right.” She fishes in her trouser pockets with her free hand. “I’ve got some change.”

“Don’t bother,” I say and hand over my wallet and a folded piece of paper. “You may leave it in her mailbox afterward.”

That incident on the beach was the nearest I’d been to death but wasn’t my first near-death experience. It was when I was five, when my mother parked our Ford Bronco by a coworker’s house and absentmindedly told me that I have to wait for “a quick errand.” As I found out afterward, she didn’t come back for the next four and a half hours. Vehicular heatstroke. Near articular autolysis. Locked away in the blistering anguish of a car. Locked out thanks to the tampering nature of a carjacker. So said the press. So said the social workers who made it to the press. So said my future foster parents.

In my experience, my breath went out almost immediately. I didn’t see it coming (or should I say, going?). One minute I was counting the yellow cars whizzing by the blacktop, and the next thing I know, my skin was matching the purple of the hospital bed, lying next to an older patient whose eyes were matching the icy white of a corpse. It turned out that I was in no better shape myself, having severe sunburns and a more severe heartbreak coupled with, once again, the signs of dehydration around my lips and tongue.

That’s why I stopped at a drugstore on my way to the amusement park this morning and bought myself a cherry lip balm in case I need one after today. It cost me $7.50 but all I had were hundred-dollar bills, so I left the change for a tip, hoping I wouldn’t need it.

“Why didn’t you just climb out?” asks the mugger girl—turns out I’ve been saying it all aloud. “Were you one of those kids who couldn’t even roll down the windows without parental help?”

I start to apply the lip balm in silence.

“You know most pickup trucks have manual handles, right?”

“Boy, could I get into other people’s houses when I was five, let alone get out.”

“Then how come you’re here with me today?”

“Well,” she cracks another walnut, “I guess because I was getting into other people’s houses by five.”

The rain stops, and the sun returns.

“I’ll spare you the decision,” she says.

I pout with a shrug and hunch forward to eye-measure the odds one last time.

“Or we can leave it to chance.” She hesitates. “If that will make you happier.” The lines on her face take their time to find meaning: “A duel or a coin flip. Done for hundreds of years.”

“Would it make sense to you if I chose the duel and you died?”

She opens her backpack and tosses in my direction a handgun identical with hers, though it looks larger in my hands.

A coin of sunlight creeps over her face like a thought: “We can do it both ways.” I must have stared at her long enough, for she explains: “We can point our guns and then flip the coin to determine who fires first. Might be more civilized. More gentlemanly.”

I consider my options. “Please remind me why we don’t simply end ourselves and get it over with?”

She takes a coin out of her trouser pocket and settles it on her thumb. “Because whoever survives gets to tell a fine story.”

I nod blandly. Then she flips the coin.